Kamud is a minor antagonist who is exclusive to the Winx Club Comic Series. He makes his debut in Issue 78: The Wizard Kamud, where he has been hired by rebel forces to help them kidnap Bloom to give them the upper hand in the war on Eraklyon.

Kamud has a light skin tone, dark grey eyes and black-and-purple striped hair that points upwards. He also has notable bags under his eyes.

Kamud wears long, black robes with long sleeves and gold accents. The robes are so long that they cover his feet and he wears a purple cape to go with it.

After returning to his old master Jazaki, Kamud no longer wears his wizard robes. Instead, he goes shirtless, revealing that he has a muscular figure, and wears light purple pants bound by dark grey bandages that cover part of his midriff. He also does not wear any shoes during his training.

Later into Issue 83, Kamud adorns himself with his purple cape now bound on him by a gold pin, and puts on black shoes. 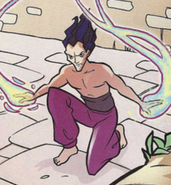 Kamud showcases a wide array of magic during both of the issues he appears in.

In Issue 78, Kamud uses his magic to conjure up an infestation of bugs and a plague of nightmares to torment everyone at Alfea. Also, through the use of his Crystal Skull, Kamud was able to oversee the results of his spells from far away. His magic is shown to be yellow, pale blue and pink(smoke), in color.

In Issue 83, Kamud showcases the ability to encapsulate his magic essence within spherical containers and use them to create powerful earthquakes. It later turns out that the earthquakes are just a result of Kamud creating giant golems out of the sides of mountains.

Retrieved from "https://winx.fandom.com/wiki/Kamud?oldid=482495"
Community content is available under CC-BY-SA unless otherwise noted.