Karel is a Specialist who attends Red Fountain. In the comics, he is a woodcutter living alone in the mountains near Crystal Lake and Darkstone Village.

Karel has a light skin tone, short dark teal hair that flares out to the sides with lighter bangs that rest on the sides of his face, and blue eyes. Like many of his fellow Specialists, he is fairly muscular. He also wears two different outfits depending on which canon he appears in.

In the comics, Karel wears a light blue dress shirt with a brown sleeveless jacket on top. The sleeves of the dress shirt are rolled up to make them look short, most likely having to do with his job as a woodcutter, and the collar is flared just over his jacket. He also wears green pants bound by a brown belt with a silver buckle, and brown boots.

Karel's attire in the comics.
Add a photo to this gallery

As a werewolf he has brown fur and a bit of white fur at the chest. He only has ripped up jeans on, as the rest of his clothes have been ripped off. And he has long black claw like nails. 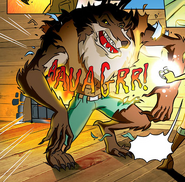 Not much is known about Karel in the animated series due to him being a background character who is rarely seen and has no speaking roles.

Though, in the comics, Karel displays a distant personality. Choosing to live secluded in the mountains, Karel is a loner who does not even make trips to the nearby town at the base of the mountain. When Flora tries to get him to open up, he remains distant and keeps up his emotional walls. Even when he helps Flora and her friends, he remains firm and serious, constantly making sure that they know that they need to leave by the time he sets.

He is also shown to be rather humble as he makes it clear that coming to help a group of strangers save their friends was "nothing special." Coupled with this, Karel is also generous and caring, as he is not afraid to help travelers in need even when he does not know them and will even open his home to them to spend the night. When Flora accidentally triggers his transformation, Karel confesses to never wishing for Flora to see him in such a state and he tries to fight off his feral instincts for a brief moment to keep her safe.

In “The Show Must Go On!,” he is seen cheering during Musa’s concert.

In “The Phoenix Revealed,” he is seen dancing during the party.

In "The Wizards' Challenge," he is seen with his classmates looking at the Mark of Valtor in the sky.

The Battle for Magix

Karel makes his debut halfway into Issue 13. With the Winx and Specialists separated after being caught in a sudden hailstorm and Tecna and Timmy now dangling off of a cliff, Karel rushes in to help Bloom, Flora and Sky pull their friends back up to safety. Once the two have been pulled out of harm's way, Karel introduces himself and insists that he did not do anything special, as he only reacted accordingly after hearing their screams. He then insists that the group follow him back to his cottage to rest for the night as he does not want them running the risk of getting lost while looking for their friends. When the group ultimately accepts his invitation, Karel leads them back to his cottage.

By sunset, Karel and the group arrive at his cottage, where he makes it clear that they can only stay for the night and must be out by tomorrow morning. Once night falls and everyone gets comfortable, Flora decides to converse with Karel while the two couples cuddle by the fire. He continues to be insistent on how he did not do anything special when he help them save Tecna and Timmy, but Flora begins to prod him with questions wanting to know why he lives all by himself and why his windows have been barred. Karel dismisses all of her questions by repeating what he told her and her friends when they arrived: that they must be gone by tomorrow morning and can never spend another night here.

Once the sun rises, the group sets off to continue their trek to Crystal Lake as promised. Karel gives them directions that would take them to Crystal Lake much faster that would also make sure that they would not get lost. The group then says their goodbyes to Karel with Flora looking visibly nervous when looking back at him. As they make their way to Crystal Lake, the group reunites with Stella, Musa, Brandon and Riven, and Tecna goes on to tell them about their run-in with Karel. Stella playfully claims that Flora has experienced another broken heart but Flora is still too concerned with Karel's self-imposed solitude.

Karel does not appear again until later, where Flora rushes towards his cottage to evade a pack of ravenous wolves. Though she thanks him for letting her back in, Karel confronts her by claiming that she should not have come back. Flora, now worried, wonders why he is staying in the dark and pulls out her vial of concentrated moonlight to light up the cottage. Much to his dismay, the concentrated moonlight forces Karel to transform into a werewolf. He struggles to explain that he had been avoiding the moonlight because of his curse and admits that he did not wish for Flora to see him this way. Giving in to his instincts, he begins to attack Flora but is blocked by a barrier of thorny vines Flora summons to protect herself. He then howls at the top of his lungs as Flora flees his cottage in tears.

A few days pass and Flora has been renting out certain books from the Alfea Libraries looking for a way to help Karel out of his situation. She then tells Stella that, with the full moon gone, the thorny barrier of vines left at Karel's cottage have also changed into something different.

Back at his cottage, Karel walks outside with his clothes in tatters. He quickly takes notice of the light pink flowers blooming on the vines that barred him from leaving the night before and takes a moment to look at them as he is reminded of Flora.

While it is unknown whether Karel possesses any magical abilities in the animated series, he is shown to have been inflicted with a curse that causes him to turn into a werewolf when exposed to moonlight in his only appearance in the comics. Unlike other werewolves that have appeared throughout the comics, Karel does not and cannot willfully transform between his human and werewolf forms, and he can only ever return to his human form once the source of moonlight is gone. So, to make sure he never becomes a werewolf, Karel keeps himself cooped up in his cottage with the windows barred and shut by nightfall.

Once he has transformed, Karel can only fight off the feral instincts that come with his monstrous form for a short amount of time before succumbing to them. Gaining the physiology of a wolf/human hybrid, Karel is given access to greater brute strength and the ability to howl like a wolf.

It is never revealed how Karel was afflicted with his werewolf curse or if it is even a curse, as Karel may have been born as a werewolf and sees it as a curse.

Retrieved from "https://winx.fandom.com/wiki/Karel?oldid=475525"
Community content is available under CC-BY-SA unless otherwise noted.