Kiko is a blue and white rabbit with large dark brown eyes. He has a patch of white hair at the top of his head and on his chest. During Season 4, his blue fur becomes much brighter and his eye color becomes a lighter shade of brown.

With Season 8, his fur is no longer a brighter blue color and returned to its original shade. Kiko's face is a bit more rounder and his cheeks are a lot fluffier. His rabbit teeth is much more pronounced and he now has a fluffier bosom.

In the finale of Season 2, he gains a pair of light blue wings just like other Pixie Pets. However the wings are no longer seen in later seasons. 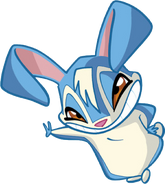 Always hungry, perceptive, protective, and caring, Kiko has shown many times how he worries about and loves Bloom, her family and his friends. He is also full of fears to the point of fainting when facing Knut very closely and jealousy when thinking he was not being loved enough by Bloom after Lockette came in. Sometime Kiko can be naughty, nasty and selfish. But he manages to overcome his bad sides especially when friends are in danger or he finds himself in a better situation.

He is very clumsy often tripping, falling or even getting hurt by someone else. He can be possessive but helpful at the same time. Kiko is willing to comfort others when they are down, such as making Flora feel wanted when she felt lonely in comparison to her friends who had love interests. He even tried his best to act silly to comfort an upset Stella who was crying over her parents' fighting. Though it did not work out very well.

The times when Bloom had made decisions out of fear and insecurities, although understanding, Kiko honestly tells her he disagrees when asked. This includes when she is acting irrational and tries to reason with her (such as when she was distressed over Sky and Diaspro). When Kiko dislikes someone he does not hesitate to show it; like blowing a raspberry at Mitzi when she insulted Bloom.

Kiko is a pet bunny and belongs to Bloom. He has magical power and even grew wings in Season 2, even though they are not seen again. Kiko is, however, suspected to have some sort of magical qualities, which are shown early in Season 1; he passes through Alfea's barrier that only allows magical creatures. This is confirmed in the Season 1 finale when he is shown flying to get himself and Icy's pet duck to safety. He is also seen in the "Secret of the Lost Kingdom", where a little girl in the flower shop saw him floating. He is shown flying again in the "The Shadow Phoenix", while carrying Bloom's headband. In the last episode of the Season 2, Kiko gains pixie animal-like wings. However, they have not been seen since, whether by his choice or some type of limit on his magic.

He is shown to have incredible strength for a rabbit/bunny, as he could carry an entire pyramid of fruits or furniture for some time before it tumbles down. He also is capable of unleashing a fury of attacks.