Princess Krystal is a fairy who attends Alfea and is also the Princess of Linphea, which is Flora's realm. She is first introduced in "Return to Alfea", where she is revealed to be an old friend of Helia.

She has lavender hair and green eyes. She wears a light green dress that goes over her left shoulder. On the dress there is an indigo flower on the edge of the dress on the left. She wears gold bracelets on her left arm and a green vine on her upper right arm. She wears her hair in a very low and loose ponytail held together by indigo flowers and she wears another on over her left ear. She wears white socks with teal pumps.

Second from the right. 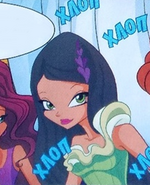 Krystal with black hair in Issue 169.
Add a photo to this gallery

She wears a light blue turtle-neck shirt with no sleeves and shorts. She also has her green vine on her upper right arm and wears light blue high tops and knee pads.

Krystal wears a diadem that has a yellow flower and white rims. Her dress is gold and has two orange flowers, one on the top of her dress and one on the bottom where the dress splits. She wears pale green silk sleeves, thin gold bracelets and high heels.

Furthest right.
Add a photo to this gallery

Krystal appears to be fun-loving, friendly and helpful, but can be oblivious, as it took her awhile to figure out Helia's relationship with Flora and the fact that it hurts when she reintroduced Diaspro to Sky in hopes of restoring his memories. But, when she realizes the problems she has caused, she makes the effort to fix them and also tries to reassure the ones who have been hurt that there is nothing suspicious happening.

Sometime during her childhood, Krystal met and became friends with Helia. Given her reaction upon seeing him for the first time in years when they meet again in Season 5, it is safe to assume that the two were quite close as children.

In "Return to Alfea", she is seen during Faragonda's speech and the arrival of the Winx. She noticed Helia at Alfea's yard. Surprisingly, Helia introduced Flora as a "friend" of him to her. Krystal drags Helia away, telling him that they needed to catch up. This concerns Flora. Later, Helia gets hurt by Darcy's attack and Krystal heals him with her magic.

In "The Sirenix Book", she agreed to heal Sky's memory when asked by Flora, but failed as there was a barrier of "something Sky doesn't want to remember" which is the bad luck bestowed by the necklace he lost.

In "The Power of Harmonix", in an attempt to bring back Sky's memory, she brings Diaspro in hopes that it will bring them back, much to the dismay of Bloom and Stella.

In "Secret of the Ruby Reef", she is seen during the school dance.

In "Trix Tricks", she is seen at the Annual Wind Riders competition.

In "The Devourer", she is seen attending the Soverigns Council at Domino Palace.

In "The Problems of Love", she is seen playing volleyball at Alfea along with Stella, Musa, Aisha, Tecna, and Flora. She was on the opposite team and she won by listening to Palladium's advice, and after her victory she ran and hugged Helia, much to the dismay of Flora. Helia congratulated Krystal but told her he needed to speak to Flora, but when she noticed that she had left, Krystal realized that she has been interfering with their relationship.

In "Battle for the Infinite Ocean", she appeared in Alfea's Dining Hall looking rather sad. She goes over to Flora and asks her if they could have a private talk about Helia. Krystal tells Flora that she is sorry for the trouble she caused in their relationship. Krystal then remembers the hug she had with Helia but realizes that Flora was watching when it happened. Krystal tells Flora that she and Helia are just friends and that Helia loves her, but instead of feeling relieved, Flora gets up to leave and says to Krystal "I wish I could believe that", clearly still not convinced.

In "The End of Tritannus", she is seen on Andros watching the Winx perform and celebrate Tritannus' defeat.

In "The Legendarium", she is dancing with other fairies in celebration of Faragonda's one hundredth anniversary party.

In "Mythix", she is she seen attending Alfea's Mother's Day celebration.

Krystal is described by Flora as a "healer". With an immense knowledge of healing, Krystal can heal a person via a healing spell. However, she was unable to restore Sky's memories, because the memory of losing the Pendant of Eraklyon blocked her healing powers. Her magic is shown to be blue, green, and golden in color when using certain spells.

Krystal may know some basic, first-level spells that all fairies can use, such as telekinesis, transmuting objects, and fixing minor messes.

Retrieved from "https://winx.fandom.com/wiki/Krystal?oldid=482656"
Community content is available under CC-BY-SA unless otherwise noted.