The Legendarium World is a dimension which debuts in Season 6.

Those who enter the Legendarium World cannot remain within it for too long, otherwise they will be trapped inside the imaginary world should they remain.

The Winx Club Comic Series presents a third method of entry into the Legendarium in the case of Athris. Revealed in Issue 125, Athris was able to enter the Legendarium World by entering one location contained in it through The Legend of Queen Morwen with her own sceptre.

Seven ancestral fairies who lived in the Legendarium World left it and began traveling across the Magical Dimension, including planet Earth.

The Winx gain the Ancestral Wands, which contains the Mythix power, and enter the Legendarium world. They meet in front of the Doorway to the Worlds that tells them to look for the Fantasy Emerald and the Silver Spear and to forge these items to create the key to lock the Legendarium.

Acheron is later freed and fights Bloom one-on-one in the Legendarium World. Bloom uses the legends of Alfea against him and successfully traps him in a box given to her by Eldora. She then fights the Trix who were made a legend by Acheron, eventually trapping them in bubbles of energy. Selina locks the Legendarium for good, effectively sealing Acheron and the Trix away.

In "The Secret of Alfea," it is briefly mentioned by Bloom as the Dimension of Legends.

Sometime during Palladium's youth, his lover, Athris, became so enamored with The Legend of Queen Morwen and its titular character that she used her magic sceptre to teleport into the tale's setting to assume Morwen's role. However, upon entering the Dark Elves' Domain, Athris was quickly corrupted by its wickedness and became trapped in the role she so desired to play. During the years she spent assuming the role of Dark Elf Queen, Athris gradually lost all memories of her home in the Elven Kingdom and of her lover to the point where she also lost her sense of self.

In the world contained within the Legend of the Lantern, a young man named Jack had fallen in love with a young sorceress named Sydonia, who lived in a large house just on the outskirts of his hometown. During one of his trips to Sydonia's home, Jack was gifted with a magical lantern that would ease his journeys to and from it, keeping him from harm. Meanwhile, Jack's wizard friend, Salzius, became jealous of the love he and Sydonia shared so, one night, during another one of Jack's visits to Sydonia, Salzius casted a large fog of dark magic that even Jack's lantern was incapable of penetrating, leading Jack to wander out of his world and to Earth, where he was forced to spend decades wandering around, searching for his dear Sydonia. With Jack out of the way, Salzius barged into Sydonia's home and took her prisoner in his manor the hopes of making her his.

Meanwhile, an Earth girl named Alice somehow entered the world of legends, ending up in Wonderland, which was suffering under the iron-fisted rule of the tyrannical Queen of Hearts. With help from the allies she made while in Wonderland, Alice was able to defeat the Queen of Hearts and disappeared, presumably having returned back to her home on Earth. On the other hand, the Queen of Hearts came to regret her decisions after being defeated by Alice and left Wonderland shortly before the events of Issue 129. With no one controlling the kingdom, the Jack of Hearts took over as its new king and revealed his true colors as he began to rule Wonderland much more harshly than the Queen ever did. To ensure that no one could usurp him, the Jack of Hearts put the kingdom's Card Soldiers under a trance as he released a fearsome dragon from its binds to guard the castle.

The Mad Hatter fled to Earth in search of Alice to free Wonderland once more, but the Jack of Hearts caught wind of his plans and sent a squad of his Soldiers to apprehend and possibly execute the Hatter.

The Winx first enter the Legendarium World using their Mythix Wands in Issue 125 after learning of what happened to Athris, Palladium's long lost lover. Upon entering the Realm of the Dark Elves, the Winx combat the inhabitants, including their king and queen, Whisper and Morwen, until Morwen realizes that she is actually Athris herself after snatching the pendant Bloom had gotten from Palladium.

Once Whisper and the Dark Elves are finally subdued, Athris fully regains her memories and relays them to the Winx. She fears that she may never be able to return home back to her beloved Palladium until Bloom tells her that the only way for her to reverse the effects of being in the Legendarium World for so long is to break her sceptre. Athris does so without hesitation and successfully frees herself from being forever bound to the role of Dark Elf Queen. Afterwards, the Winx happily escort Athris out of the Legendarium World and back to the Elven Kingdom, where she has a loving reunion with Palladium just outside his old home.

In Issue 127, the Winx enter the Legendarium World once more to help guide Jack back to his hometown contained within the Legend of the Lantern. Once there, the six fairies help Jack search for his beloved Sydonia as he realizes that his decades of wandering around on Earth only amounted to a week in his world.

Eventually, Jack's lantern reacts to Sydonia's magic and leads him and the Winx into the Haunted Forest. After braving through the forest thanks to Flora's magic, the group finds a tower in the midst of it, which Jack identifies as the manor of Salzius, his old friend.

Once inside the manor, Jack is confronted with the horrid truth that Salzius, jealous of the love he shared with Sydonia, cursed him into wandering in another realm and kidnapped the young sorceress to force her into loving him over Jack. When Salzius attacks Jack, the Winx engage in a fight with the sinister wizard and are only able to subdue him with the light of Jack's magic lantern (amplified by Stella's Shining Star). With Salzius gone, Jack regains his young appearance and thanks the Winx for their help as he revels in the joy he feels now that he and Sydonia will never be separated ever again.

Doorway to the Worlds

Domain of the Snow Queen

Labyrinth of the Minotaur

Gloomy Wood Forest
Add a photo to this gallery

The Realm of the Dark Elves

The World of Jack O' Lantern 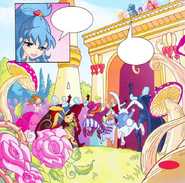 The Kingdom of Wonderland
Add a photo to this gallery
Retrieved from "https://winx.fandom.com/wiki/Legendarium_World?oldid=479521"
Community content is available under CC-BY-SA unless otherwise noted.