Lemmy is the Keeper of Andros' Ocean Gate and is Aisha's bonded selkie.

Lemmy has pale aqua skin, blue eyes with pink eye shadow and turquoise body-tail with polka-dot pattern. She wears a blue spiral shell-shaped hat decorated by an aqua pearl. A transparent purple veil attached to the hat. She has a cyan clam-with-pearl symbol on her forehead. 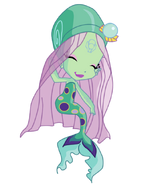 According to Aisha, Lemmy is very shy, just like Flora. When she talks, she whispers instead.[1]

Lemmy was first seen with one of the guardians of Andros, when they were guarding the gate between Andros and Earth. Suddenly a large amount of toxic waste comes through the Gate with Phylla following behind. Phylla tells Lemmy to help her stop pollution before it makes things worse around Andros. They tried to use their powers, but oil still keeps floating towards the Andros prison, eventually being absorbed by Tritannus, who mutates the guards and steals Lemmy and Phylla's powers.

Lemmy meets Bloom, Stella and Aisha at Andros and she bonds with Aisha and regains her powers. She leads the Winx to Shimmering Shells, but she was knocked out by pollution and she woken up by the Winx.

She later introduces Illiris to Winx as they have traveled to Solaria and Illiris bonds with Stella.

She along with Phylla, Illiris Nissa visit King Neptune again, to tell them about the fate of Ligea and Nereus in the hands of Tritannus, who turned them into Mutants. Tritannus then appears, sends his mutated minions to fight his father and Tressa, and turns them into mutants too. Lemmy, along with Phylla and Illiris escape him when Tritannus steals Nissa's powers. She and Illiris travels to Melody to aid Aisha, Musa and Stella. However, Musa was turned into monster by Tritannus. Lemmy then has an idea to try to bond Musa with Sonna and her plan works as Sonna regains her powers and removes the curse from Musa.

Lemmy makes an appearance of where Omnia was and trying to get away but Tritannus got there in time before she could escape. Herself and the other Selkies were trapped in a stormy barrier, preventing them to not leave it and were cover by something not letting them to speak. Then she and the Selkies showed the Winx where the hidden pearl was and stays outside to warn Omnia if Tritannus escaped with the pearl. She was last seen when they danced around in a line with Omnia.

Lemmy, with the aid of the pearl symbol on her forehead, she can close and open the gate to Andros, enter the Infinite Ocean and shoot teal energy bolts. She can also converge her powers along with other selkies as seen in multiple episodes in Season 5.