Limes is a character that appears exclusively in the Winx Club Comic Series. She makes her one and only appearance alongside her fellow Sirens in Issue 107: The Dark Sirens, where she and the others have kidnapped Niobe and plan to convert her into becoming their fifth and final Siren.

Limes has a light skin tone, dark blue hair that juts out from her head in all directions, light blue eyes and pink lipstick.

She wears a pink bra that looks like two shells attached to a lighter pink mesh that covers her midriff. She has bits of pink coral wrapped around her forearms with matching pink fingernails and a long mermaid's tail that matches the color of her hair. 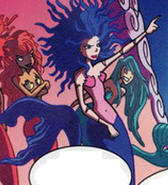 As a being a darkness and evil, Limes is nothing but cruel. She enjoys the torment brought on by her actions and even takes the time to mock and laugh at Niobe when she tries resisting the Sirens' plans of converting her. Additionally, due to the power that she and her sisters could attain upon Niobe's conversion, Limes shows no concern for anything other than the completion of the Dark Sirens.

It is unknown how Limes was before she was converted herself.

During Andros' ancient history, Limes assumed the throne as its queen. Unfortunately, about one thousand years ago, Limes was kidnapped by the Dark Sirens and forcibly converted into the fourth one. From then on, she took on the role as leader of the Dark Sirens.

Limes makes her debut alongside her fellow Sirens in Issue 107 initially in a flashback as King Teredor explains the gravity of his wife's kidnapping to the Winx and his royal guards.

Realizing what the moving stars of the Mermaid's Tail constellation meant, Teredor explains that the Dark Sirens emerge from the darkest depths of Andros' oceans every time the constellation shines brightest in the sky. Using any form of water to reach the mainland, the four Dark Sirens, Nazca, Terala, Unla and Limes, sneak into Niobe's bedroom using the fountain and attack her, leaving the coral necklace at the scene of the crime to signal their presence to those who discover the trashed bedroom. With Niobe as their target, the Winx quickly realize that they plan to convert her into being their fifth and final Siren to complete the group, as there are five stars in the Mermaid's Tail constellation, and Teredor reveals that they will become invincible if that were to happen. And so, the Winx go into their Harmonix to pursue the Sirens to rescue Niobe.

Limes makes her physical debut halfway into the issue. Once the Winx sneak into the Deep Blue, the home of the Dark Sirens, they watch on as Limes demands for Niobe to forget about her name, life and loyalties to her kingdom. When Niobe refuses, Limes mocks her and reveals that she will become their final Siren regardless of whether she wants to or not. She then goes on to explain how Niobe will be converted: she will be submerged into the deepest and darkest depths of the Deep Blue, where she will re-emerge as Asfodelia with no memory of her life as Queen Niobe. Limes and her sisters are caught by surprised when Unla is suddenly covered in a strange, glowing veil but retaliates quickly by attacking Aisha with her Moray Eel Smack spell, keeping her away from Niobe. She and the Sirens begin to do battle with all of the Winx, unaware of the Selkies bringing Niobe back up to the surface.

During the battle, Limes makes many attempts at spreading the darkness of the Deep Blue to help her and her sisters hide and strengthen their dark magic. Even when Stella tries to counteract her spell, Limes simply absorbs the light of her Shining Mirror, which gives her and her sisters the opportunity to unleash a powerful Convergence that has been amplified by the surrounding darkness of the Deep Blue. However, they quickly break formation once Flora channels her energy into the surrounding algae, causing them to glow so brightly that it leaves Limes and her sisters disoriented. The four of them then struggle to keep Aisha's Thirteenth Seal at bay as Limes demands to know the name of the fairy who is proving to be more powerful than them. Aisha declares herself to be the Princess of Andros, insisting that the Sirens made a grave mistake in challenging her, and forces them into the depths of the Deep Blue with her Thirteenth Seal, effectively banishing them forever.

As a creature of darkness, Limes and her Siren Sisters all utilize dark magic and, as stated by Teredor, they also have the ability to teleport from place to place by using any body of water. Also, like all magical beings, Limes can create generic magic blasts and shields. Her magic is blue in color.

Limes showcases much more control over all things darkness as she can will the darkness of the Deep Blue into spreading and intensifying. She even has the ability to absorb or take light away from someone else.

Retrieved from "https://winx.fandom.com/wiki/Limes?oldid=482842"
Community content is available under CC-BY-SA unless otherwise noted.