Lithia is the Keeper of Zenith's Ocean Gate and Tecna's bonded selkie.

Lithia has pale green skin, light green eyes with pink eye shadows, lilac/light pink lips and light green body-tail with diamond patterns. She wears a green spiral shell-shaped hat decorated by pink lines. A transparent purple veil attached to the hat. She has pink symbol on her forehead, which consists of three pink circles in sharp of triangle-like formation, those circles are connected to a pink ring in middle of them, which has fourth pink circle inside. 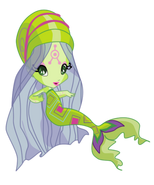 She appears to speak in a logical tone like Tecna.

Lithia first appears in guarding the ocean portal to Zenith when Tritannus appears and takes her powers away from her. She then finds the Winx and bonds with Tecna. Lithia follows them to the Data Bridge Castle.

She later appears in "Sirenix," where the Winx go to fully obtain Sirenix and cross the Sirenix Gate. She is seen with the other Selkies, Winx, and the Guardians of Sirenix converging their magic to help the Winx gain Sirenix.

Lithia makes an appearance of where Omnia was and trying to get away but Tritannus got there in time before she could escape. Herself and the other Selkies were trapped in a stormy barrier, preventing them to not leave it and were cover by something not letting them to speak. Then herself and the Selkies followed to the Winx where the hidden pearl was and stays outside to warn Omnia if Tritannus escaped with the pearl. She was last saw when they danced around in a line then Omnia.

Lithia, with the aid of the triangle circle symbol on her forehead, she can close and open the gate to Zenith, enter the Infinite Ocean and shoot purple/green energy bolts. She can also converge her powers along with other selkies as seen in multiple episodes in Season 5.