Finding her way through mazes and portals
Unlocking and locking things

She is terrified that her watch will stop. She always has lots of other watches in her pockets

Finding, following and locating anything that has gone missing

Eileen Stevens
Lockette is the Pixie of Portals (Pixie of Direction in the Nickelodeon dub), thus knowing her way anywhere. She has a hair clip that transforms into a scepter which helps her point people in the right direction.

Bloom often finds herself lost and is constantly on a journey to discover the secrets of her past throughout the series (or 'has many hidden passages in her heart'). Lockette not only helps Bloom find her way physically but also emotionally, as Bloom tries to discover her true self and connect with her power and family. Some people believe that Lockette might also have the power to open magical portals to other worlds. She is Bloom's bonded pixie.

Lockette has bright pink hair resembling Tecna's with even cut-straight bangs and teal-green flower hair pins. Her skin appears to be fair in color while her eyes are green with purple eyelashes. Her lips are pinkish in tone. Most of her dresses are different shades of pink.

Lockette wears a pink laced dress with a blue keyhole shaped tie and green-blue lace up boots. Her wings are light blue and swirl/curl inward on the ends. In "Professor Avalon's Secret," after Lockette tries to play on the computer like Digit was, she ends up accidentally ripping her dress, then Chatta makes a new one for her. On some occasions, Lockette changes her main outfit this yellow sun dress. Some times the dress is seen with the midriff open.

Her clothes for the seasons 6 and 7 is the same as her PopPixie main outfit. 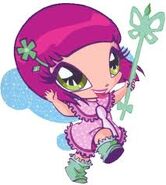 Lockette's civilian outfit consist of a light pink tee-shirt with a green collar and button section, a multi-layered pink skirt going darker in tone on each layer, with a band-like belt at the top being a dark magenta color. Pink ruffled cuffs on each wrist, an upside down green-yellow heart shaped key in her hair, and below the knee light purple socks and green shoes.

Lockette gains a hair clip on the right side of her head. She wears a purple dress with many ruffled pieces of cloth and a green ribbon in the center. She gains lilac see-through gloves that end at her elbow with flowery pieces, along with green sandals with a single purple flower piece and blue platforms. Her wings are light blue, light purple, and silvery-pink.

Being the second youngest of the Winx's pixies after Piff; her feelings get hurt easily.

In Season 3, she seems to have a dislike for Sky due to the brainwashing incident but she forgives him (but still becomes protective of Bloom). She also helps Bloom through all her emotional turmoil in Season 3.

Lockette is a sensible and cautious Pixie who is meticulous and tidy. The organization is her strong point and she does not like playing it by ear because when something unexpected happens she gets flustered; which makes her nervous and touchy, lose her self-confidence and get into trouble. Her friends know her well and try not to upset her, with the exception of Chatta though who enjoys upsetting Lockette.

She is very intelligent and sensitive and always ready to help anyone in trouble.

If things do not work out as planned, Lockette would not admit she was wrong and is quite stubborn. Although she is not prepared to admit she was wrong, she is ready to go to any length to show that she was right. Lockette who is generally shy and cautious then becomes overconfident and ends up complicating matters.

As a PopPixie, her powers increase and she can open portals, follow directions and teleport quicker.

In "The Legendarium", it is seen that Lockette and the other pixies are able to teleport.

As seen in "Broken Dreams," whenever Lockette is in danger/trouble, she is able to send a psychic alert to her bonded fairy to notify her about her current condition.