The Fall of Magix

Lucrezia is a witch who attends Cloud Tower.

Lucrezia has long light teal color hair, black eyes and a tan complexion(sometimes a pale complexion). Her clothing consists of a gold collar necklace with a midnight blue pendant at its center, a midnight blue strapless top and below knee, flared pants with a yellow belt. She wears gold colored boots. She also has a gold bracelet on her right arm.

In season 8 she has a paler complexion. And her overall appearance is lighter in color. 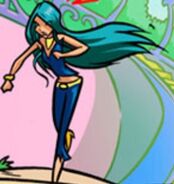 Not much is known about Lucrezia, however, she appears to be a intelligent and fun-loving person. She seems very open-minded and, unlike most witches, does not mind hanging out with fairies. Lucrezia may also be a bit flirtatious, as her main reason for wanting to associate with fairies is because "they always manage to get the best boys." As such, Lucrezia is shown to having a disdain for prideful witches whose "snobby ways" always drive away said cute boys. She even calls out a fellow classmate for her hatred against fairies for that very reason.

None of this means that Lucrezia is not prideful, though. In Issue 52, she clearly enjoys relishing in the praise of her teachers and classmates when she was called up to answer a question and did so with ease (thanks to Icy's "Sublimax candies"). It also appears that she does not like people worrying about her, seeing as she refused people's help when she was not feeling well and was adamant in partying again.

She can also be pretty petty, especially when her easy way out of a difficult problem ends up being ruined, but that does not mean she is unable to see past her mistakes. She is willing to apologize for her actions if necessary.

In "The Fall of Magix", She makes her debut as the Trix take over Cloud Tower. She is caught in Stormy's tornado but is then saved by Griffin.

In "Storming Cloud Tower" She is in the cell with Griffin and three other witches. However, only her foot is seen.

In "Alfea Under Siege," Valtor places his mark on all the Cloud Tower Witches after having them lure him inside while disguised as a deer. While she is not seen, it is safe to assume that Lucrezia was a part of Valtor's attack on Alfea.

In "Valtor's Box," she is seen in Griffin's office with Lucy and Polly apologizing. Even though it was unwillingly, they still feel guilty for working with Valtor.

In "The Legendarium", She makes a cameo at Cloud Tower.

In "Winx Forever", She makes another cameo at Cloud Tower, as the new witches have to retake the entrance exam.

In Issue 10, she makes a cameo screaming and running away from the monster the Trix created. Wearing an outfit that is green rather then her usual blue.

Lucrezia appears close to halfway into Issue 12 where, after striking down the Trix, Griffin reveals to the trio of how she and the imprisoned students escaped; Lucrezia included. She then joins Bloom, Sky, Brandon, Stella, Knut and her classmates in fleeing Cloud Tower to aid the survivors in the battle against the Army of Darkness at Alfea with Griffin's lead.

In Issue 29, she is on the Cloud Tower team for the tournament, where she is overwhelmed by ivy. In this issue she is colored incorrectly having red hair, and a mostly orange outfit.

Lucrezia is seen again in Issue 38, where she is seen talking to a friend of hers after class. Her friend tells her that Musa is setting up a place where bands can practice their music and Lucrezia finds this an amazing and fun idea. She decides that the both of them should go one day since fairies "always manage to attract the best boys," however, a classmate of hers named Lynel disagrees with the idea of hanging out with fairies. Lucrezia then states that it is thanks to arrogant snobs like her that keep them at bay. The two of them soon get into an argument as the Trix watch on with bored looks on their faces.

Lucrezia can be seen in a flashback alongside Ivey and Rubis in Issue 43: Lost Words as Icy asks if her sisters remember what Headmistress Griffin had told them.

It turns out that Griffin had informed her students of a prize that they can receive if they find a counterspell for the curse that has been plaguing Magix and that this prize would be even bigger should they find the counterspell before any of the Alfea Fairies.

Lucrezia appears again in Issue 52, tired of Zarathustra's lesson how to make rocks soft, Lucrezia expresses that she wishes there was a sort of magic to help pass tests without studying. An idea that strikes Icy who was listening. At the end of the lesson, Zarathustra announces a test in two days.

To prepare for the upcoming test, Lucrezia studied all night without much sleep. She is tired and certain she cannot retain any information, to make matters worse, Zarathustra informs her that she will be testing her today in class. Defeated, Lucrezia goes limb on a wall when Icy approaches her and calls her "lucky", something Lucrezia takes offense to. Icy then informs her that she has a type of magic that will help her remember everything.

Hesitant at first, Lucrezia gives into the offer and takes a magical candy. She instantly remembers what she read and passes the in-class review with flying colors.

She then informs a classmate about the candy Icy gave her. On the day of the test, everyone had already taken a piece of candy and passes the test. They are so excited they all head to the White Horse to dance. Lucrezia on the other hand, frantically search for the Trix who are at the beach. She asks Icy if she can have four more but when she did not have enough money, she desperately offered her bracelet to Icy, who accepts. She appears to be addicted to the candies once she had received them.

Back at the White Horse, she dances her heart out until she faints and is given some water and a chair to sit on. She clearly pale but denies any assistance from the Winx or anyone else and heads home.

After the whole despising the Winx for telling the truth, Lucrezia and the other witches apologize to them for the way they acted, realizing that they had saved their lives by telling the teachers. They all then have some fun.

Lucrezia does not make a physical appearance in Issue 60 and is only mentioned by Icy after catching word of a time machine being built in Alfea's basements.

Like all witches, her powers are derived from the negative aspects of magic. Lucrezia may know some basic, first-level spells that all witches can use, such as telekinesis, transmuting objects, and fixing minor messes. Like all witches, she can fly. 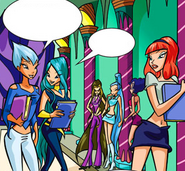 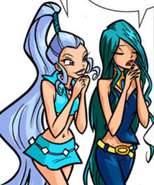 Add a photo to this gallery
Retrieved from "https://winx.fandom.com/wiki/Lucrezia?oldid=482857"
Community content is available under CC-BY-SA unless otherwise noted.