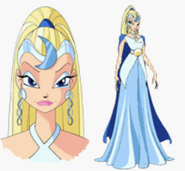 Luna (on the right) in Stella's nightmare.