Maeve is a character exclusive to the Winx Club Comic Series. She makes her debut in Issue 108: The Scream of the Banshee, where she has joined Andy's band for the Celtic Music Festival. It is later revealed that Maeve is a banshee who can disguise herself as a human and is actually more than a thousand years old.

As a human girl, Maeve has two different appearances, though, she retains many traits in both of her disguises, like her black hair, dark grey-brown eyes and pale complexion.

In the modern day, Maeve's hair is at shoulder-length and is rather messy. She wears a zebra-striped tank top that droops passed her right shoulder, leaving it exposed, a purple miniskirt and black knee-high boots.

In the distant past, Maeve's black hair was tied up into a bun with her bangs bound back. She wore a simple white blouse under a brown dress with black shoes. 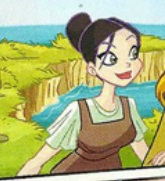 As a banshee, she has green skin, pointed ears, red eyes and sharp teeth. Her hair is a pale-blonde color and it flows down to her feet.

She wears a dark brown jumpsuit with a lighter brown belt around her waist and thighs. Two light brown strings tie the top to her body and she wears white stockings with gold trimmings that leave her feet exposed. 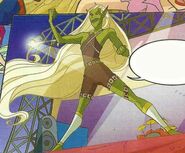 Maeve seems to be very devious and flirtatious in nature. Not only is her first interaction with the Winx a confrontational one caused by a joke directed at Stella, but she spends the rest of her introduction with Andy's arm wrapped around her waist. She also does not seem to be embarrassed with flaunting her attractiveness to others, as she had no qualms about staring longingly into Andy's eyes right in front of Bloom. Obviously, she would not have known about Bloom and Andy's romantic history together, but Maeve stays close to Andy almost as if she is flaunting that he is hers now. There is also the fact that Maeve had seduced an elven prince long ago, most likely in the same way she charmed Andy and Rio.

Maeve is also quite perceptive, maybe more than she lets on. This can be seen when she immediately becomes suspicious of the Winx after they found everyone's instruments "by chance." She may have suspected that the Winx had some sort of run-in with people from her past.

However, once Maeve reveals her true self, so does she reveal her true colors. As a banshee, Maeve is a malicious individual. Even in the past, Maeve took great joy in seducing handsome men until they lowered their guard so that she could curse them with her voice; turning them into her mindless goblin slaves. Thanks to her exile, Maeve has also grown bitter towards anyone who stands in her way, and she has no problem sicking her goblin slaves on innocent bystanders that happen to be in the area. It is currently unknown whether Maeve was ordered to do what she did or if she simply feels the need to do so. Either way, Maeve feels as though Ireland is her land and she was determined to "reclaim" it even during her interdimensional exile.

It was then that Maeve was confronted by Morgana and the Earth Fairies, which led to a long battle until Maeve was ultimately defeated and exiled into another dimension. Centuries later, Maeve returns to Earth from her exile and assumes the appearance of a beautiful young woman once more to "reclaim" Ireland and exact her revenge.

Maeve makes her debut in the beginning of The Scream of the Banshee once Jason and the Winx arrive at their hotel in Ireland. She pokes fun at Stella for being a bit spooked by the hotel's decor until Andy and Rio come downstairs after hearing the commotion. There, the two boys reveal that Maeve is an expert at singing Celtic ballads and is their new vocalist; even go on to describe her as "the strength of their band." Maeve then calls Andy a treasure as the two embrace one another and stare into each other's eyes, much to Bloom's surprise and, later, her annoyance.

Maeve later appears out on a small boat practicing with Andy. Stella and Bloom, who are watching from their room window, cannot help but find Maeve's voice to be beautiful and unique. Bloom even wonders how Maeve can hit certain notes that no one else could and quickly gets distracted by the lights dancing around Maeve. She and Stella come to the conclusion that Maeve may have the ability to turn her voice into magical energy until they are caught off guard by Maeve flashing a monstrous face.

Maeve does not appear until after the Winx run into a group of goblins and hear Sloan's warning about Maeve. She begins to suspect that the Winx are trying to hide something from her as Stella claims that they found the stolen instruments by chance.

Later that evening, Andy and his band perform at the Celtic Music Festival and, during their performance, Maeve ditches her human disguise as she starts turning members of the audience into goblins. She is then interrupted by Aisha's Thirteenth Seal, but the Winx have still acted too late, as Maeve has already turned more than half of the audience along with Andy and Rio into her goblin underlings. She sends her minions to attack anyone and everyone on sight as she declares that she will be taking back Ireland, believing that it rightfully belongs to her. Just as everything seems to be working in her favor, Maeve is restrained by Sloan, who gives Flora the opportunity to muzzle Maeve, rendering her powers useless. The Winx then use a Harmonix Convergence to dispel Maeve's influence on everyone and, in doing so, they revert Sloan and his followers into their original elven forms. Sloan and his followers proceed to apprehend Maeve and they assure Bloom that she will be taken to the Court of Light, where no one will be able to fall victim to her voice anymore.

As it had been stated many times throughout Issue 108, Maeve's voice is the source of all of her dark magic. Banshees themselves are able to turn their voice into magical energy which they can then use to fight or defend themselves. Maeve has used her voice to captivate Andy and Rio, causing them to regard her with adoration and, in Andy's case, slight infatuation. Even Bloom and Stella found themselves drawn to Maeve when they were watching her and Andy practice. The effects can even become so extreme to the point where those captivated by Maeve's voice can become much more aggressive, and this can be seen when Andy immediately lashes out at Bloom as she tries to warn him of Maeve. Whenever Maeve showcases her vocal abilities, either lights and rainbow-colored notes will swirl around her or bright yellow sound waves will expel from her mouth.

Maeve mostly uses her voice to forcibly transform those around her into her mindless goblin slaves, much like she had done with Sloan and his followers in the distant past. Her dark magic is apparently so powerful that the combined efforts of Morgana and her Earth Fairies could not break the curse Maeve had put on Sloan, and the best they could do was restore the free will of him and his followers. The Winx were only able to fully dispel Maeve's curse by casting a powerful Harmonix Convergence.

Despite how powerful her voice (and dark magic) is, Maeve can be rendered completely powerless if her mouth is forced shut.

Maeve has also shown that she is capable of shapeshifting; specifically into a human in order to disguise herself and potentially seduce young men into lowering their guard.

Retrieved from "https://winx.fandom.com/wiki/Maeve?oldid=491310"
Community content is available under CC-BY-SA unless otherwise noted.