Magic of Believix is a game on the Winx Club Official Website, featuring the battles from Season 4.

There are nine levels at total and seven attempts/life at each level. If taking too long to defeat an enemy, they transform the pets into monsters, being only defeated if hit. To complete a level rescue five pets and defeat the enemies.

All names retrieved from the game script: 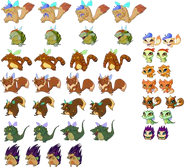 Fairy Pets sprites
Add a photo to this gallery

Retrieved from "https://winx.fandom.com/wiki/Magic_of_Believix?oldid=527038"
Community content is available under CC-BY-SA unless otherwise noted.