The Green Heart of Lynphea

Miele is the youngest daughter of Alyssa and Rhodos, as well as Flora's younger sister. As of Season 6, she is a student at Linphea College.

In Season 3, Miele has short honey-colored hair and jade eyes, her skin is notably paler than Flora's.

From seasons 6 - 7, she is taller, her skin is a bit darker, and her hair is longer and a ginger orange shade. However in Season 8, she is shorter, very much like her original appearance.

Miele wore a pink headband with a large, pale yellow fluffy piece and a nature themed mid-thigh length dress: the shoulder straps were pink and fluffy, the bodice was composed of pale yellow flower petals that vaguely formed the shape of a lotus flower, the midriff was made up of green grass-like wrappings, and the skirt was comprised of pink flower petals. Her bicep-length gloves were made of grass-like wrappings with pale yellow fluffy cuffs. Under her dress, she wore pale yellow knee-length tights. She also wore green anklets and pale green flats. Her pale green wings were shaped as large flower petals that came in three sections, overlapping each other.

She has her hair held up by a yellow elastic with a pink and yellow flower. She has large yellow wings, that are pointy at the top with a pale green colored end, pink at the top of the top wing, and her bottom wings are round and have pink dots. Pink stockings, dark pink fabric bracelets, and she has on a green and yellow dress on with the top being green. But at one point her stockings are plain pink heels. 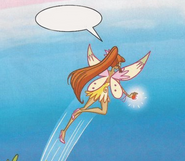 Miele is friendly and caring, mostly to her sister, Flora. She is also brave and selfless as she sacrificed herself to prevent the Trix from attacking Flora and stayed to help her sister beating the Treants.

One of the things that does hurt her feelings is when Flora refuses to allow her to join in on her missions, claiming it is too dangerous, even though Miele had proven many times she is a capable fighter. Miele is rebellious and often goes against Flora's words; it is possible that Miele wants to prove to her sister that she can take care of herself. It is this rebellious nature that Miele has helped/saved the Winx when they needed it most. This also shows that Miele is willing to help no matter what.

Miele also seems to be adventurous as she is always eager to join the Winx on their missions.

Retrieved from "https://winx.fandom.com/wiki/Miele?oldid=526879"
Community content is available under CC-BY-SA unless otherwise noted.