She is a white bunny with pink bangs and blue eyes. She wears two carrot-shaped hair decorations. Sometimes, she also wears a green outfit with two carrot ear decorations. Her wings are orange. 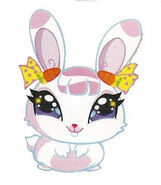 She enjoys working out and fights for Kiko's attention. She is also romantic.[1]

Milly originated from a stuffed bunny rabbit that the Winx were going to throw away, until Flora used her nature powers to bring them to life. Since then, she has been seen around the Love & Pet store, typically with Aisha. She was also present during Roxy's fight with Gantlos, trying to help Roxy defeat him.

In Perle, Milly had to move to Andros with Aisha, for the princess birthday. She had trouble sleeping far from the others fairy pets. The next day, she entered Aisha's bedroom through the half-open window and landed on the frame of the big mirror as Aisha, Cisò and Nanny, picked an outfit for the birthday party. On the penultimate dress, Milly picked the diadem of emerald and pearl, that was above the bed, and landed it on Aisha's head. When Aisha could not take her eye from the mirror, Milly grabbed her ears with her paws like a "funny question mark." And when Aisha confessed she was satisfied with the dress, Milly flew around her and covered her with little licks. Later on, Milly followed Aisha to the beach hopping around her, and staying on guard as she felt something strange from the casket shell. Trying in vain to convince her owner, knowing that once Aisha "had decided something, she would not change her mind." Milly followed Aisha to her bedroom "like a shadow."

When Aisha opened the casket and saw the necklace of black pearls, Milly paraded with a robe string around her neck: pretended it was a necklace. Milly closed the shell casket, when Aisha was bewitched with the necklace in a numbness-state. As Aisha waited for the Winx, Milly was in a "beauty-guard version" surveilling the necklace. At the summer party, Milly was hopping nervously beside Aisha as she told the others about the latest occurrences. The next morning her white paws were pitch black because of the black pearls' magic. In the end Milly appeared at Aisha's birthday party with her paws covered in chocolate, which scared the Winx for a moment thinking they were black again because of magic.