Mola is a PopPixie character. She is the PopPixie of Tunnels and is a friend of Chatta and Livy.

She has purple eyes. She also has red hair, which is braided and tied with an orange ribbon. Some of her sideburns are curled. She wears an orange sleeveless jumpsuit. Its pockets have an even darker orange tone. The outline of the shorts is teal. Her flashlight on her head is tied with a yellow ribbon. She has teal sleeves that partially covers her arms. She wears teal high socks, which is mostly covered by her brown boots.

She wears a purple tank top, which is tacked in. Her tank top also has a rectangular, orange cloth that holds the yellow buttons. She wears a red belt to hold her orange shorts with purple furs. Her right leg is covered with a high, yellow sock while the other leg has shorter one.
Mola's PopPixie outfit consists of red-orange tank top. She has a light blue belt with a yellow badge hanging on her belt. She wears a red-orange shorts. Also, she wears arm-length, purple gloves. She has bigger wings. Her outfit also has thigh-length, blue boots. Her hair has a purple flower ornament and is tied with blue ribbons.

Mola is a pixie who has quite a temper. When it comes to her job, she is very devoted.

Mola has the ability to shoot energy bolts, which can create tunnels. With her MagicPop, she can simply spin rapidly to create a tunnel. 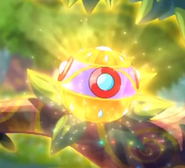 Molla's Magic Pop
Add a photo to this gallery
Retrieved from "https://winx.fandom.com/wiki/Mola?oldid=483320"
Community content is available under CC-BY-SA unless otherwise noted.