Morpho is a PopPixie character. He is the PopPixie of Transformation. He debuts in the seventh episode of the series.

Morpho has spiky, teal hair. He has thick eyebrows. His irises are blue. He also wears a yellow jacket. The hood of his jacket has a thick, purple line that curls as the line ends. There are three pink circles at the middle of his jacket. At the bottom of his jacket, there is a long hand warmer pocket. He also has lime green wings. His pants are purple and his shoes are cerulean with yellow laces.

His transformation outfit includes a sleeveless spandex suit and a helmet, which only covers his forehead and some of his hair. Primarily, the colors of his full outfit are purple, orange and yellow.

Morpho seems to be in Lockette's age, for they used to be classmates, but his job is unknown. In some instances, it could be concluded that he is infatuated to Lockette. He shows his affection for her by playing tricks on her.

This was briefly shown when he transformed Maxine to Lockette, and Maxine (as Lockette) kissed him. After that, he tumbled down and blushed. He also easily blushes when a girl touches him, even if is really Maxine.

Morpho has the ability to transform himself and also others to anything or anyone he wants.

Morpho as a Paper Airplane

Morpho as a Fish

Morpho as a Ball

Morpho as a Lamp 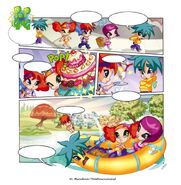 Morpho as a Swimming Float

Add a photo to this gallery
Retrieved from "https://winx.fandom.com/wiki/Morpho?oldid=483324"
Community content is available under CC-BY-SA unless otherwise noted.