He is a small brown teddy bear with green eyes and round cream ears and belly. He wears a green pendant around his neck and his wings are light lavender. 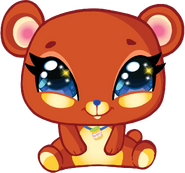 Pepe is wild[1]. He loves to dance, and has an enormous appetite.

Pepe was originally a plush doll that the Winx were going to throw out on one of their jobs, but became bonded to Musa after Flora brought them to life. He makes various appearances throughout Season 4, generally at the Love & Pet. Pepe also showed up with Kiko and the other pets during Roxy's fight with Gantlos.

Pepe is seen on the Winx's Love & Pet website and is then downloaded by Musa. Pepe and his fellow fairy pets are actually downloaded in a different timeline.