Erica Schroeder[1]
Piff is the baby Pixie of Sweet Dreams. She is bonded to Aisha and often helps her with her troubling nightmares. She is the youngest of her Pixie friends and thus, the most vulnerable. As she is an infant she speaks in baby talk, which is difficult for most to understand; this gives either Digit or Chatta the task of translating what she says.

Piff, like Aisha, is dark-skinned, with soft light green eyes.

She is dressed in a pair of cream-colored striped pajama pants with red piping. Her little tank top is rose pink with cream spots. On her head she wears a darker rose pink puffy nightcap with dark cream spots, a light cream headband and trimming, and a dark maroon ribbon tying it down (in the show, there are no large spots and the whole outfit is simplified). Since she sleeps so much, she does not wear any shoes. Her little wings are bright pink and she has no lower wings.

In Season 6 to Season 7, her outfit is very similar to her PopPixie main civilian. 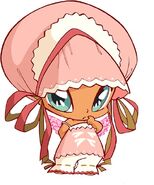 Piff retains her normal civilian outfit but changes her head for a green-brownish detective's cap and wears a shawl around her neck.

Piff's outfit is the same one from the Winx Club series although her the ribbons on her shirt are magenta and the pink colors are brighter. She wears pink socks and does not wear her nightcap.

Piff wears a yellow frilled tank top with light colored sleeve pieces, a multi-ruffled pink skirt, and pink slip on shoes with green ballerina styled lacing up her legs reaching all to her knees. On her hair she wears a fuchsia-pink bow on each bun.

Even though she does not speak very well everyone still understands her. She is often seen dozing or sleeping and tends to dislike loud noises (seen when Stella was being loud and it caused Piff to cry). Piff worries about Aisha a lot and is very attached to her. She cried when she was not able to go with Aisha on her mission to rescue the other pixies.

Piff dislikes it when people interrupt sleeping. When Stella and Musa wakes Aisha up to ask about her etiquette Piff grunts and pouts at the interruption.

Piff is the youngest of the group.

In “Green Attack,” Piff was sleeping in a flower and is saved by Martino, as Pam was cutting the tree leaves.

As the Pixie of Sweet Dreams she has the unique ability to put others to sleep and transform their dreams from bad to good. This is called Sweet Sleep and it works when Piff sleeps on a person's head, this makes them fall to sleep instantly. If the person sleeping is having nightmares, the ability intercepts these nightmares and changes them into good dreams. This ability calms whoever is sleeping, allowing them to have a good night's sleep. Piff can use sleep dust, so even if she cannot yawn, she can still make anyone to fall to sleep. Piff being as young as she is, and being the holder of a sleep spell, is often seen sleeping.

In "The Legendarium," it is seen that Piff and the other pixies are able to teleport.

As seen in "Broken Dreams," whenever Piff is in danger/trouble, she is able to send a psychic alert to her bonded fairy to notify her about her current condition.

In PopPixie, her power is to spread the desire to sleep with a contagious yawning, making her enemies including Narcissa fall asleep.