PopPixie is a spin-off series based on Winx Club featuring the Pixies from Winx Club as main characters. However, the Winx do not appear in the series. It aired from January 10 to March 22, 2011, and consists of 52 episodes of thirteen minutes.

“In a quiet corner in the Magic Universe there is a special dimension, a miniature world populated by gnomes, elves, talking animals… and especially by the Pixies. The city they live in is Pixieville, where they live their extraordinary everyday lives using the incredible magic of the MagicPops, magic globes of the Tree of Life, who allow the Pixies to turn into mini-heroes… the PopPixies!”

“In a quiet and secluded corner of the Magical Universe, there is a very special dimension, a miniature world populated by Gnomes, Elves, talking Animals, and above all by Pixies.

The town they live in is Pixieville, and it is here that Pixies go out about their extraordinary daily lives using the incredible magic of the MagicPops, the magical globes of the Tree of Life.

The MagicPops are the magical globes that contain positive magic grows on the Tree of Life. When a Pixie uses her or his talent wisely for the good of all, she or he may receive a MagicPop to become a PopPixie.”

The setting of PopPixie is set in an alternate universe to that of Winx Club. Several aspects of the show prove that the shows do not take place within the same continuity:

In Season 6 of Winx Club, Pixies who originally appeared in PopPixie such as Cherie and Caramel, and PopPixie locations such as the Molly Moo, were introduced in the Winx Club continuity and respectively replace Tune and Digit as Musa's and Tecna's bonded pixies. This created an inconsistency in the separation between PopPixie's and Winx Club's continuities since these Pixies had never appeared in previous seasons of Winx Club.

This inconsistency was continued when in Season 8 of Winx Club, Gnomes who originally appeared in PopPixie like Grind and Ronf were introduced in the Winx Club continuity. 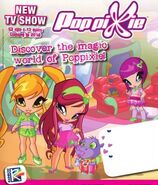 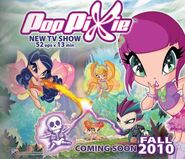