Power of Gaia is an offensive/strategic spell used by Garont where, after leaping from a high point, he cracks the ground he landed on by causing a small earthquake. 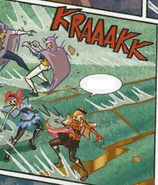 Retrieved from "https://winx.fandom.com/wiki/Power_of_Gaia?oldid=488380"
Community content is available under CC-BY-SA unless otherwise noted.