Saving the Tree of Life!

Rex is a PopPixie character. He is the leader of the Elves.

Rex is an arrogant and haughty Elf who has a big opinion of himself. He admires Maxine and thinks that the rest of the world is not worthy of his attention.

Rex has a brilliant mind and comes up with perfectly perfidious plans and schemes. The gang looks up to him and when they are bored it is Rex who has ideas on how to keep up the spirits of the gang.

Compared to the others, Rex has a more mature and criminal side to his character which often frightens even his companions. This aspect of his character particularly appeals to Maxine, his fiancée, who is very ambitious.

Rex has light purple eyes, with purple hair with blue at the tips of his hair. He wears a purple colored shirt with a long sleeved dark grey blue color mix with a dark blue tie and pocket hanky. He wears a long jeans with a dark purple belt with chains. On his left wrist he wears a spiked bracelet.

Rex in a night gown 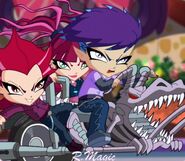 Rex on his chopper
Add a photo to this gallery

Retrieved from "https://winx.fandom.com/wiki/Rex?oldid=489327"
Community content is available under CC-BY-SA unless otherwise noted.