Romina is a character exclusive to the comic series. Debuting in Issue 114: Fairy Talent, she is a promising young fairy who greatly admires and idolizes Bloom.

Her hair is tied into two braids by two red bows and each braid flows down to her waist. She wears a white sweater with a red collar and sleeve-endings. She also wears a short red skirt and matching red ankle-high boots with grayish-brown soles.

Romina's braids are undone which lets her hair flow down to her waist and she now has one bow that wraps around her head like a headband.

She wears a sleeveless dress with a pale pink backless top that looks like a pair of wings across her chest and a short red skirt. She has matching red boots that now go up to her knees and she has four small pink wings on her back. 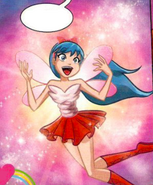 Romina is a plucky and positive girl that will do anything she can to help anyone who needs cheering up. She is very excitable when it comes to things that may relate to Bloom, as she admires her so much that she considers the Keeper of the Dragon's Flame to be her idol. Romina is very dedicated to Bloom as she had studied up on all of her spells and tried her best to keep Bloom safe after her powers were sucked out of her. Her dedication to Bloom can also be what makes Romina very brave for her age as she flew out into danger with no hesitation in order to act in her place for a Convergence; a type of spell Romina most likely has never casted before. She can also be quite sassy when she gets confident enough as she had no problem giving Stella advice as if she were much older than her during their Convergence.

Romina and her two friends, Karen and Asia, are attending the Festival of Magic that is being held at Alfea. Romina is excited to know where Bloom could be and darts off once one of her friends tells her that Bloom may be somewhere near the Linphea Booth. Not looking where she is going, Romina bumps into another fairy and causes her basket of dragon eggs to go flying. With a single shout, Romina is able to stop the dragon eggs from falling by making them levitate, but she has no idea how she was able to do so. As she explains to the fairy that things like this have been happening recently, Romina is greeted by Headmistress Faragonda with Bloom and Flora by her side. Romina, excited to see her idol, jumps into Bloom's arms as Faragonda introduces her; claiming that she is a young fairy full of talent.

As the four of them walk through the Festival, Romina catches sight of a baby dragon sneezing fire on a little boy's lollipop, which causes him to cry. Romina conjures up a swarm of pink and blue butterflies to cheer up the crying boy which surprises and amazes Bloom, as she was able to cast a third-level comfort spell with such ease. Romina is then invited to see a magical fashion show by Bloom and she gladly accepts. On their way to this fashion show, Romina confesses that she has studied all of Bloom's spells and she is praised by Bloom for her diligence. She is then told by Bloom that a fairy must also control her emotions in addition to casting powerful spells.

Soon enough, Romina and Bloom make it to the stage where the magic fashion show is being held and regroup with the rest of the Winx. She is told by Bloom that controlling one's fear and anger is also important for a fairy to master, however, her friends Stella does not always succeed in that regard. Once Stella finds the shoes she had been scrambling for, a strong wind begins to pick up and, when everyone looks towards the sky, they see a dark red cloud approaching!

Romina watches as the Winx transform into their Sirenix to try and combat the dark energy cloud, but to no avail. Romina rushes in to catch Bloom once she is knocked unconscious thanks to one of the Vampire Cloud's attacks. She, along with Bloom, Faragonda and a mass of panicking festival-goers try to escape the Vampire Cloud's rampage by fleeing into the school building as the five remaining Winx girls try to hold it off.

Once everyone is safe inside, Faragonda declares that they will need the combined efforts of every fairy and faculty member in order to protect themselves. Romina volunteers to go outside and help the Winx fend off the Vampire Cloud but she is stopped by Bloom, who believes that Romina needs to save her energy. Romina then saves Bloom by blasting one of the Cloud's tendrils as it tried to sneak inside from behind and she tells Bloom that she is willing to do anything for her.

As all of the faculty, fairies and even the booth attendants join their magic to protect themselves, Bloom and Faragonda try to figure out what they need to do in order to defeat the Vampire Cloud. That is when Faragonda realizes that only a powerful Convergence spell can dispel the Cloud but the Winx cannot cast one unless six of them are present. Bloom then gets the idea to have Romina cast the Convergence in her place but Romina is hesitant. Suddenly, another one of the Cloud's tendrils breaks through a large window but, thanks to her quick thinking, Romina is able to blast it away. Now full of confidence, Romina is certain that she can act in Bloom's place. Faragonda sends a power boost towards Romina which forces her into her fairy form.

The young fairy zips out of the building after getting reassurance from Bloom and she beats back another one of the Cloud's tendrils before it can attack Stella. She then reports to the five Winx girls that a powerful Convergence is the only way to defeat the Vampire Cloud and the young fairy joins in on the Winx's Sirenix Convergence. She even tells Stella to control her fear in order to make the Convergence stronger and more focused. Soon enough, the Vampire Cloud is defeated and the sun shines above Alfea once again.

As Stella goes around looking for adoring fans to give autographs to, Romina wonders if she could ever be like her, but she is warned by Bloom to rethink such a wish, which causes everyone else to laugh.

While it is not known what Romina's powers are, it is possible that she mainly has the magical power to influence people's emotions. This can be seen with her only named spell, Garland of Love, which she used to pacify a crying child.

She can also cast generic energy blasts, create shields, and can cause items to levitate if she wishes for them not to fall or break.