Scylla is a character exclusive to the Winx Club Comic Series. She makes her first and only appearance in Issue 104: The Mirror of the Sea initially as a sea monster who had been cursed by an ancient witch alongside her beloved, Charybdis.

As a monster she looks like a humanoid octopus. Her lower body is nothing but tentacles, and she has tentacle like hair. And her body still has a female figure. 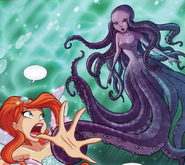 As a human she has light skin, pink lips, bright blue eyes, and pale pink hair. She wears sandals and has on a pink toga.

She is a good and innocent person. Even as a monster she didn't want to attack the Winx she just wanted their help, so she can be turned back to normal. She also cares deeply for Charybdis.

Retrieved from "https://winx.fandom.com/wiki/Scylla?oldid=477307"
Community content is available under CC-BY-SA unless otherwise noted.