In an interview[1] with Iginio Straffi from before the fourth season's premiere, it was revealed that the season would introduce a new fairy. Straffi listed the novelties of the upcoming season, including the revelation that the main characters would "find a seventh fairy" on Earth. On the same day, a Rai Due press release[2] announced Roxy's role in the new season, saying that the fairies "will meet Roxy, a new character who will become part of the close-knit Winx group. She is a rebellious and determined girl who will discover that she is the Fairy of Animals, and at the same time, the last fairy on Earth."

“The Winx Club is back! Now they will have to reach the Believix level, a new transformation that grant the ability to make someone believe in magic. In addition, Believix also gives 3 additional wings to make the form more powerful: Speedix (speed enhancement), Zoomix (teletransportation), and Tracix (time traveling). They will also meet the Wizards of the Black Circle, a group of villains who are after the last fairy on Earth, in order to gain full power. Winx Club will have to find her protect her from the the Wizards, but they have to go unnoticed. In order to live on Earth, they will open a pet shop named Love & Pet and meet Roxy, a girl who works at the Frutti Music Bar. Soon they will find out that Roxy is the last fairy on Earth! In the process, Roxy is able to discover her powers, and believing in herself and in Winx Club, will turn into a fairy and will help Winx Club drive away the Wizards and rescue the imprisoned fairies. However, they now have to face the fairies of Earth and their Queen Morgana, who are seeking revenge on humans for not having believed in them: this has made them weaker and they have been imprisoned by the Wizards. Winx Club are forced into an uneasy alliance with the Wizards as they now race to save humanity. Will the Winx Club prevail?” 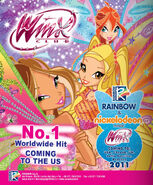 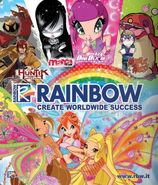 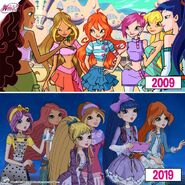