Winx Rising Up Together

The sixth season of Winx Club was first announced in 2010 along with Season 5. As with the previous season and the Specials, Season 6 was co-produced by Viacom's Nickelodeon Animation Studio. Nickelodeon's Janice Burgess, the creative consultant for the specials and Season 5, was promoted to scriptwriter for this season while continuing her role as creative consultant.

Unlike past seasons, Nickelodeon U.S. aired the episodes periodically instead of on a weekly basis. After the eighth episode, the season had moved to their streaming service from the ninth to twentieth episodes. Eventually, it returned to television on Nick Jr. on July 26, 2015, airing the current episodes as well as the remaining episodes. Season 6 concluded in the USA on November 22, 2015 and August 4, 2014 in Italy.

“A new witch named Selina joins Cloud Tower. She owns an evil book called Legendarium and through it she is able to make legends come true. The Trix take over Cloud Tower and make it fly, then order Selina to summon legendary creatures out of the Legendarium and unleash them against the magical schools. Bloom leads the Winx against the witches, but the Winx, excluding Bloom, accidentally lose their powers: will the Winx manage to get their fairy powers back and save the schools of the Magic Dimension, threatened by the legendary creatures? Comedy, action, friendship, romance, in a new exciting adventure for the Winx Club fans... and everyone else!” 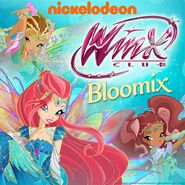 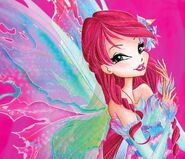