We Are The Magical Winx

Beyond The Stars Together

The eighth season of Winx Club premiered on April 15, 2019, on Rai YoYo in Italy. The season consists of 26 episodes and concluded its run on September 17, 2019. The English episodes started airing on Nickelodeon Asia on January 8, 2020.[1] It was released exclusively on Netflix in Australia on April 14, 2020 and the UK, Ireland and New Zealand on April 15, 2020.

In 2015, Iginio Straffi, the creator of Winx Club, said that an eighth season would be written but was not in production yet.[2] No details were officially announced until 2018, when it was revealed at the Russia Licensing World Exhibition on February 27 that the eighth season's premiere would not be until 2019.

Many behind-the-scenes changes were made before the eighth season entered production. Most of the essential crew members from previous seasons were not called back for this season. When asked if she would be continuing in the eighth season, Elisa Rosselli (singer for almost every Winx song since 2007) stated in an interview, "No, I didn't get a call."[3] This season is also the first without involvement from art director Simone Borselli, who was responsible for the finalized character models used through season 7. Secondly, Nickelodeon's American staff members moved to a consultant role for season 8, rather than writing the episodes directly as they had before. This is because the Nick team was busy working with Rainbow and Straffi on a new co-production called Club 57 instead.[4] Straffi himself also stepped away from focusing on the Winx Club series for this season, as he wished to focus on Club 57 and other live-action projects.[4]

For this season, the series was rebooted with a new target audience of preschool children, and the show was moved to the Rai YoYo preschool channel in Italy. The characters were restyled visually to appear younger, which would better appeal to the show's new demographic. In a 2019 interview, Iginio Straffi explained why he had chosen to gradually lower the show's intended audience over the years:

"In the last ten years, the animation audience has skewed younger. Nowadays, it's very difficult to get a 10-year-old to watch cartoons... The fans of the previous Winx Club say on social media that the new seasons are childish, but they don't know that we had to do that."[4]

At the Las Vegas Licensing Expo 2018, it was revealed that the season would mark the return of the most popular fairy transformations, Butterflix, Sirenix, and Enchantix. Afterward, a clip from the season was shown at the Brand Licensing Europe, in London, UK on October 9, 2018. Later, the first two episodes of the season premiered at the International Rome Film Festival on October 20, 2018 to celebrate the Winx's 15th anniversary.

It was later mentioned by Straffi that the season would premiere in February 2019. Production stalled and the premiere was postponed to Spring 2019, while the trailer premiered on January 27, 2019. In the following days, Rai YoYo showcased a small clip of the season. During the 2019 Nuremberg International Toy Fair, another trailer from the season was showcased. Later on March 7, 2019, the one-hundred and eightieth issue of the Winx Club Comic Series revealed that the season would premiere in Mid-April 2019 on Rai YoYo.

On April 6, 2019, the episode titles from the second half of the season were revealed. On the same day, the one-hundred and eighty first issue of the Winx Club Comic Series revealed that the season would premiere every day starting April 15, 2019 at 5:15pm and 8:30pm on Rai YoYo.

On July 19, 2019, the first look of the redesigned Enchantix was revealed on the Winx Club's Instagram account and later its transformation sequences was released onto the official channel. On the same day, Rai YoYo announced that the second half would premiere on July 29, 2019 at 6.10 pm . Later on July 23, 2019, during the Rainbow Day event, the fourteenth and fifteenth episode of the season premiered at the Giffoni Film Festival.

After the nineteenth episode, the series went into another hiatus until on September 11, 2019, where the broadcast resumed on Rai YoYo with the twentieth episode. The season finale premiered on September 17, 2019, thus concluding the season overall in Italy.

“The Winx fairies embark on a cosmic adventure that will lead them to the farthest reaches of the Magic Universe to save the stars themselves.”

“One by one, all the stars in the sky are mysteriously going out, gradually throwing the various worlds of the Magic Universe into darkness. And it looks like Valtor’s comeback is behind this terrible threat...”

“It's the night of the shooting stars on Magix and the Winx are ready for a magic party at Alfea. But a little creature called Twinkly reaches them after a long journey, bringing an urgent message: they are the only ones who can save the stars!

Following their little new friend, the Winx will set off on a cosmic adventure guided by the Lumens, creatures that generate magic stardust. Thanks to them, the six fairies will get a new amazing light-based transformation to fight against unpredictably mysterious threats that are endangering the Magic Universe.

Will they beat the shadows that loom over the stars? And who is hiding behind all this?”

“All the stars of the sky are mysteriously going out one by one, gradually throwing the various worlds of the Magic Universe into darkness. And it seems that Valtor's return is hidden behind this terrible threat. In Winx Club Season 8, the fairies of Alfea will travel to a new planet called Lumenia, where the queen will entrust them with the power of Cosmix, to protect the stars of the Magic Universe. With them, there will also be a lovely new friend, a Lumen (a magical star-shaped creature) from this planet. In addition to Cosmix, it seems that in the new series, some catchphrases from the previous seasons will return, including a new version of Sirenix and Enchantix. And of course, as we have already said, there will be the great return of one of the historical enemies that Bloom and her companions have already defeated in the past, or the evil Valtor.” 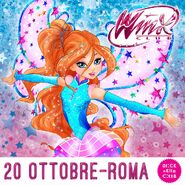 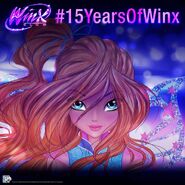 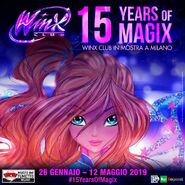 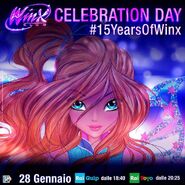 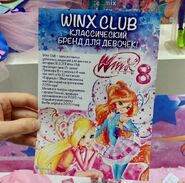 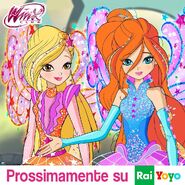 -3 days!
Send a message to your friends because the Winx Club 8 series is waiting for you on Rai Yoyo, starting April 15th.
Spread the word! 📱👩✨

-2 days!
Even the Specialists are ready to join the Winx Club for a new adventure and many moments of tenderness...
Curious? The appointment is on Rai Yoyo, from April 15th

The Winx are back!
And this time it is the Magic Universe that needs them. Are you ready to join for a new, fairylous mission? It starts on Rai Yoyo, from 20:25! 👏🏼🎉✨

To save all the endangered stars, it takes a new stellar power. It's time for Cosmix! Don't miss the new episodes of the 8 series, broadcast from Sunday to Friday, on Rai Yoyo! 😍💗⭐

Valtor wants to absorb the light of the stars to go back to being the most powerful wizard in the Magic Universe. But with the new Cosmix power the Winx are determined to save Lumenia from the dark!
Don't miss tonight's appointment on Rai Yoyo! 😨🤲🏼

At Alfea, Sky is preparing a special surprise for Bloom: a night picnic under the stars 💗
Unfortunately, however, it is already time for a new mission and the picnic must wait... who knows how Bloom will take it?
Tune in to Rai Yoyo tonight! 👩🏼‍✨

The Specialists are chasing Orion, a galactic thief who wants to steal the ruby that keeps the core of Peripla alight... but why❓
With the help of the Winx they will try to discover more and solve the mystery.
Don't miss the new episodes! 👍🏼⭐

How difficult it is to be on time for the lesson after a galactic mission... ✨
The Winx are waiting for you on Rai Yoyo, with many new adventures! 😆🎒

Today we return to Andros for a truly special occasion.
And when the mission becomes submarine... you need the right power!
Get ready for a whole new Sirenix power tonight! 😍🎉

So many emotions today on Andros! 💕
Hold on for the new mission against Obscurum and, for the most romantic fairies, there will be many super tender moments between Aisha and Nex.
The appointment is on Rai Yoyo. ⭐😘

At Alfea, the Winx and Specialists are preparing for the Great Feast of Magix... 🎉
But a new star is in danger and the Winx must leave together to stop Obscurum! New mission tonight on Rai Yoyo! 🙌🏼👩🏼‍🦰

On Syderia, Obscurum sets a trap for the Winx by putting them against the Lumen that live on the star.
Fortunately, unexpected help arrives 😆
Don't miss today's appointment, at 20:25! 🎊👍🏼

Bloom returns to Gardenia to organize her mother, Vanessa, a surprise birthday party. But when the Sun starts to go out, it will have to clash directly with Valtor... 😥
Epic face to face, tonight, at 20:25, on Rai Yoyo. 📺✨

Plot twist!
Guess who's Valtor's new allies are?
Yes, the Trix are back! 👀
A point to NOT MISS, tonight, on Rai Yoyo. ✨💙 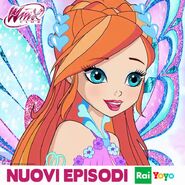 ✨Hey fairies, from Monday, 29 July, the summer will be even more stellar with the new episodes of season 8 of #WinxClub!✨
Every day, from 6.10 pm, on Rai Yoyo, get ready to fly together with your fairies friends and live magical adventures in outer space 🧚‍♀️ 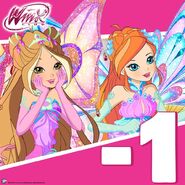 ✨TOMORROW!✨
All tuned to Rai Yoyo, starting at 18.10, for the new episodes of the Winx Club 8 series🧚‍♂️
Star missions, magical concerts and old enemies to defeat... are you ready?

The adventures of the Winx continue on Rai Yoyo, every day, at 18.10 🧚‍♂️✨
New mission? Rediscover all the Primary Stars and recompose the magical Casket of Stars. And to do that it's time to use... the Enchantix powers!💫

🌸 Sky is on a secret mission with Diaspro... oh no! How will he tell Bloom?
The appointment with a new episode of season 8 is always on Rai Yoyo, at 18.10 🌸

Today we fly to Solaria for a new mission and a super fatal party at the Royal Palace! 🧚‍♂️
Don't miss the new episode, on Rai Yoyo, at 18.10 😉

The Winx 🧚‍♀️ they arrive on Monoceros and, waiting for them, they will find the magical Winged Unicorns❣️
Ready for today's episode? Tune in to Rai Yoyo, at 👉 18:10

✨ Sky is attacked by the Black Unicorn. Fortunately, Bloom and the Winx will come to his aid! But beware... the Trix are always lurking. New, magical adventure today, at 18.10, on Rai Yoyo ✨🧚‍♀️ 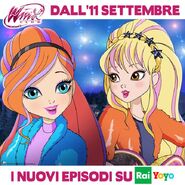 ‼️ From Wednesday #11September don't miss the appointment with the new episodes of Season 8! Cosmic! Every day, from 18:00, on #RaiYoyo. Are you ready? 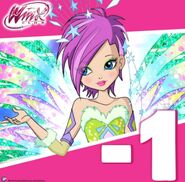 Guess where the next Winx mission will be? Yes, in Lynphea, along with Miele, Flora's little sister!
New adventure today, at 6:00 pm, on Rai Yoyo. 👧🏻🌸

It's time for the annual dance competition on Melody and the Trix are more fierce than ever! Who will win?
Find out today, on Rai Yoyo! 💃🏻🙌🏻

Riven arrives on Melody, determined to clarify things with Musa... but Darcy is ready to create the usual turmoil!
Appointment on Rai Yoyo, at 6:00 pm, with the new episodes of Winx Club! 💜⚡

The Winx arrive on Coralia in search of the sixth prime star... but Tecna and Aisha will have to learn to fight less and cooperate!
Don't miss the new episode of today, only on Rai Yoyo! 😤 ⁉️

Fly to Dyamond for the next mission but... the planet seems completely uninhabited!
It is time for a new, fairylous Sirenix transformation: the Crystal Sirenix!!!
Don't miss today's episode, on Rai Yoyo, at 6:00 pm. 💎✨

Don't miss the great season finale! #Winx against Valtor for the last, great battle to save the entire Magic Universe!
The appointment is on #RaiYoyo, at 6:00 pm and from September 20th, also at 9:15 pm!

Retrieved from "https://winx.fandom.com/wiki/Season_8?oldid=492974"
Community content is available under CC-BY-SA unless otherwise noted.