The Sirenix Boxes are boxes that each of the Winx earn in Season 5 on their quest to earn the Sirenix power.

These are star-shaped boxes that needs the three gems: Gem of Self-Confidence, Gem of Empathy and Gem of Courage, which are scattered all over the Magic Dimension. The Guardians of Sirenix reside in it. With the help of them, the Winx acquired Harmonix to help them in their quest for Sirenix.

After finding the Sirenix Book in "The Sirenix Book", Tecna and Aisha want to open it, but it does not open. They must complete a quest for one lunar cycle or they will lose their powers. Then, they must find Creature of the Rainbow Mantle to get a new power. After finding it, they must find the Gem of Self-Confidence, Empathy, and Courage, which are hidden somewhere in the vast oceans of the Magic Dimension. Then, they gain the Sirenix. Bloom, Stella, and Aisha searched in the ocean of Andros for the Shimmering Shells. With the aid of Lemmy, the Gatekeeper of Andros, they found the Labyrinth of the Abysses, where the Shimmering Shells is found. After healing the shells from Tritannus' pollution, the Shimmering Shells gave the riddle to find the Gem of Self-Confidence. At Alfea, Stella, with the help of her Sirenix Guardian, realized that the gem is on Solaria. Stella, Flora and Aisha searched in the ocean of Solaria for the Royal Deeps, where the gem is to be found. With the help of Illiris, the Gatekeeper of Solaria, they found the Azure Valley, the place where they can find the Royal Deeps. After defeating the Jellyfish monster, they finally acquired the Gem of Self-Confidence. The Sirenix Book gave its riddle, the song of Musa's mother, to Tecna. With this lead, Musa, Aisha and Stella looked for the place, where Musa's mother sang it to her, the Song Wharf. Tecna the informed them that the Ruby Reef is near the Song Wharf, so they went there. But  Tritannus attacked Aisha, who was saved by Musa. Musa turned into a monster. Through bonding, Sonna, the Gatekeeper of Melody, revived its power back and reversed the dark spell on Musa. They played the Coral Harp in the Ruby Reef and recorded it, so Tecna could locate the gem. By understanding the song, Tecna, Aisha and Bloom realized that the Gem of Empathy is in the Data Bridge Castle in the ocean  of Zenith, so the three went there. Lithia, the Gatekeeper of Zenith, bonded with Tecna, revived its own power and located the Data Bridge Castle. After defeating Tritannus' mutants, they acquired the Gem of Empathy. The Sirenix Book told the Winx to find the Flower of the Depths. Flora, Stella and Musa searched for it in the ocean of flowers. With the help of Desiryee, the Gatekeeper of Linphea, they located the Flower of the Depths. They healed it from pollution and it told them, that the next clue will be given by the book. The book told Tecna and Musa that the next gem is in the Yellow Reef in the ocean of Domino. The two informed the others to find the gem. Bloom, Stella, Flora and Aisha, who are in Domino, were forced to go to the Yellow Reef. With the help of Serena, the Gatekeeper of Domino, Desiryee, Illiris and Phylla, the Gatekeeper of Earth, they located the Yellow Reef, which was polluted. After reverting the spell, they saw the gem in the mouth of a giant shark. Bloom defeated it and acquired the Gem of Courage. Their quest is not yet over, so the Sirenix Book gave them another riddle. Bloom's Guardian of Sirenix informed them that they must return to where they started, which is in Lake Roccaluce in Magix. Finding out that it was in danger, they immediately healed the Source of Sirenix. With the help of the Sirenix Guardians, Omnia, the Supreme Guardian of Sirenix was able to open the Gate of the Infinite Ocean.

The Winx with their Sirenix Boxes.

Musa with her Sirenix Box.

Bloom and her Sirenix Box.

The Guardians granting the Winx Harmonix

3D version of the Sirenix Box 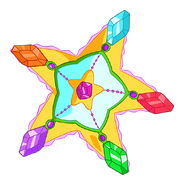 Add a photo to this gallery
Retrieved from "https://winx.fandom.com/wiki/Sirenix_Box?oldid=520758"
Community content is available under CC-BY-SA unless otherwise noted.