Sonna is the Keeper of Melody's Ocean Gate and Musa's bonded selkie.

Sonna has pale pink/purple skin, blue eyes with pink eye shadows, red lips and red body-tail with music sheet-like patterns. She wears a red spiral shell-shaped hat decorated by two flute-like corals, one is pink and one is purple. A transparent blue veil attached to the hat. She has a purple harp-shaped symbol on her forehead. 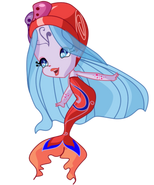 Sonna has been described by Musa as having a bad temper. Besides that, she is determined, when she fought the Devourer. She seems to be tough, but if she is threatened by bigger creatures, she would become afraid.

In the Winx Card Game App, she is described to be a capricious, sensitive and nervous Selkie.

When Tritannus is about to travel to Melody by opening its gate, Sonna closed it again. She was cornered by his mutants, and Tritannus stole her powers. Through bonding with Musa, she regained her powers. Later in the series, she converged with the other gate keepers to heal the Source of Sirenix in the cave of Lake Roccaluce and entered she Infinite Ocean with the Winx and Omnia.

She also appears with the other Gate Keepers whenever the Winx enters the Infinite Ocean.

In the "Devourer", she along with Lithia and Desiryee are attacked by the Devourer of the Abyss.

In the "Battle for the Infinite Ocean", she along with the Selkies of the Magic Dimension helps the Winx defeat the mutants.

Winx Club: The Mystery of the Abyss

Sonna makes an appearance of where Omnia was and trying to get away but Tritannus got there in time before she could escape. Herself and the other Selkies were trapped in a stormy barrier, preventing them to not leave it and were cover by something not letting them to speak. Then herself and the Selkies followed to the Winx where the hidden pearl was and stays outside to warn Omnia if Tritannus escaped with the pearl. She was last saw when they danced around in a line then Omnia.

Sonna, with the aid of the harp symbol on her forehead, she can close and open the gate to Melody, enter the Infinite Ocean and shoot purple energy bolts. She can also converge her powers along with other selkies as seen in multiple episodes in Season 5.

With the ability of Bonding magic, Sonna is seen to able to break Tritannus's dark spell on Musa in "The Secret of the Ruby Reef."