The Specialists is a group made up of six Red Fountain Specialists. Initially starting out with four, they were brought together as a squad during their first year in Red Fountain. They also serve as the secondary protagonists of Winx Club as they date and assist the titular group in their various adventures.

The group has undergone many member changes - gaining new members, senior members leaving on their own accord, or through a sudden absence, and even death. As a result, the Specialists have become one of the most actively changing groups in the series.

Initially, this group consisted of four: Sky, Brandon, Timmy and Riven, who were all brought together as a squad as they attended Red Fountain. The boys faced many interpersonal struggles as they tried to learn the ropes of becoming strong warriors, which inadvertently helped them grow closer as a group as they forged true friendships and trust within each other, made memories and lived an adventurous first year of school.

Most of the group's struggles that year were the fruit of Riven's difficult behavior and eventual betrayal in his defecting to the Trix. However, he would later realize that his true value with the Trix was as their pawn, which would help him realize what true friendship was and who his real friends were.

By their second year, the group is joined by Helia, a former Red Fountain student who was later readmitted and nephew (or grandson) to Headmaster Saladin. They would also go on to assist the Winx and their new friend, Aisha, in taking down Lord Darkar as their reputation at Red Fountain grew to the point of being considered one of the best squads it had to offer.

Over a year later, the group grows in size once more with the addition of Nabu, a skillful wizard from Andros but, unfortunately, he does not remain long as he later sacrifices himself for the safety and lives of the Earth Fairies in Season 4. Nabu's death greatly impacts his friends, mainly by forcing them to realize that their various adventures could cost them their lives. Both his best friend, Riven, and fiancée, Aisha, were negatively impacted the most with the latter facing more difficulty with moving on.

The group is later joined by Roy, the royal yacht driver from Andros, in Season 5 as they assist the Winx in dealing with Tritannus, Aisha's psychotic cousin who wished to destroy his family for making his brother, Nereus, take what he believed he deserved: position as next-in-line to the Triton Throne. By Season 6, Roy was admitted into Red Fountain but inexplicably leaves the group towards the end of that very same season. Riven, one of the longest staying members, also leaves the group to further his training and better himself as a person following his breakup with Musa, but, by Season 8, he has returned to his place on the squad. Additionally, Nex joins the group as an official Specialist around the same time as Riven's return. 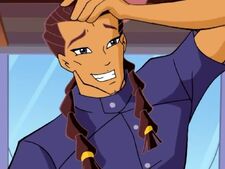 Sky, Brandon, Riven and Timmy have been attending Red Fountain and have met the acquaintance of Stella. They formed a squad and carry out their first mission together when Stella calls for their help while she and her new friend, Bloom, are being overpowered by Knut and his goons on Earth.

They arrive just in time to prevent the troll from hurting the two girls. The group and the two fairies subdue Knut and his goons, though the ogre escapes, the Specialists are able to detain the hunting troll. After introductions and the hunting troll in their custody, they return back to school through a portal.