The Stalax Sorcerer is a character who has been featured exclusively within the Winx Club Comic Series, where he makes his only appearance in Issue 94: The Fury of the Snow. The Sorcerer is a mischievous old man who wishes to rid Stalax of all its tourist attractions and businesses to avenge the ravaged lands.

He wears a light yellow robe, with a red hooded cape. He also has a red ring on his ring finger, and he carries around a staff that has a top that looks like a goats head.

Indoors he has a light green sweater on with a brown zigzag line around the chest and back. 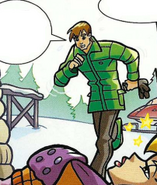 The sweater under his coat.
Add a photo to this gallery

He may know basic spells such as telekinesis, transmuting objects, and fixing minor messes.

Retrieved from "https://winx.fandom.com/wiki/Stalax_Sorcerer?oldid=476864"
Community content is available under CC-BY-SA unless otherwise noted.