Stereo Crash is a Believix offensive spell used by Musa, in which she hurls sound waves at the enemy or manifests large magenta-colored speakers that attack the enemy with sound. 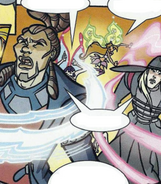