Winx Club Wiki
Register
Don't have an account?
Sign In
Advertisement
in: Article in Maintenance, Incomplete, Winx Club,
and 63 more

Ilaria Fioravanti
Tecna is the Fairy of Technology. She hails from Zenith and currently acts as its Guardian Fairy. Tecna is Timmy's girlfriend. She is one of the founding members of the Winx Club, being the fourth Winx girl introduced after Bloom, Stella and Flora, and is an alumna/student of the Alfea College for Fairies as of The Secret of the Lost Kingdom. Tecna is often relied on as the group's tactician and strategist thanks to her high IQ and ability to keep a cool, rational head even in times of high stress.

Tecna is a young woman with a light skin tone, teal-blue eyes and magenta-colored hair which is often styled in an asymmetrical bob-cut on the right side with a single small hair strand sticking up (until Season 4).

As of Season 8, Tecna's hair is a more solid purple/lilac color where it appears to be a little thicker/longer and her eyes are now dodger-blue, thanks to newer animation graphics used for the show.

For both seasons of World of Winx, Tecna wears a royal blue-colored short-sleeved top that is covered in small pink jewels and sparkles with sparkling silver areas along the ends of the sleeves and bottommost hem worn over a lavender undershirt with slightly longer sleeves, a matching royal blue skirt that becomes lighter halfway through (its midsection being cut off by a string of white pearls with small grey bows at each side of her hips), sparkling pink leggings with small purple and white dots, and pink high heels. She also wears a large bright blue bracelet around her left wrist, as well as three thin purple ones around her right one, and can occasionally be seen sporting a small, circular purple handbag that is covered in a jagged jewel pattern of the same color. 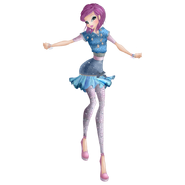 Despite being the Fairy of Technology, the only form that takes on a hi-tech look would be Tecna's Winx; being a full-body suit with small digital wings that transform into a large hanglider on her back whenever she wishes to fly, and Charmix, which resembles a communicator. Though the theme stops being as overt once she gains Enchantix, it still remains in later forms, just in smaller details like Tecna's wings being more geometrically shaped compared to other fairies' and so on.

Tecna's color palette also makes several small shifts throughout the series; starting at lavender with neon green as an accent, then gaining blue as a primary color for her Bloomix. Her greens also balance out or even overtake the purples in other forms like her Butterflix, Tynix and World of Winx forms.

As shown in the series, Tecna is extremely smart, with an IQ of 150, and loves technology. Sometimes she gets engrossed in technology and her enthusiasm for sameness can be irritating. She is self-confident and a perfectionist. She is always practical and logical, sometimes to a fault. Tecna has trouble expressing her emotions and bases the majority of her decisions on pure logic, though, in the second and third season, she gets over that trouble and is more open and friendly toward her friends. She is selfless and nice to them; she truly cares about them, even if she cannot always show it by using emotions. She develops emotionally through the series and eventually experiences crying, stating that she never cried before. In Season 3, she even decides to give up her emotions and love to acquire the Water Stars needed to defeat Valtor. But Arcadia gives back her emotions and love.

She loves science, experimenting in her spare time by creating numerous techno devices. She also has a photographic memory. She loves computers and video games. Tecna also enjoys playing sports and being active.

During the early run of the Winx Club Comic Series, Tecna is much more emotional and temperamental than she realizes. Though she still preferred to prioritize logic over her own emotions, Tecna had a bit of a temper; one that would become more apparent in situations that ended up playing out in an entirely different way than she had initially thought or calculated.

Also, unlike her TV series counterpart, Tecna possessed more of an interest in boys; she just held very high expectations for whichever one caught her fancy. If such a boy did not meet her expectations, she would get irritable and ultimately make them the target of her temper. Sadly, Timmy had to face much of Tecna's wrath due to his clumsy and awkward self almost never meeting her expectations of a romantically proactive guy though, rather than simply become impatient with and give up on Timmy, Tecna stuck by him with the hopes that he would meet her expectations eventually. Coupled with this is Tecna's surprising jealousy as she would assert herself in situations where another girl tried flirting with Timmy. Her bouts of jealousy could even turn violent like in Issue 19 when she whacks Tabitha in the face with a cliffside branch and feigns ignorance.

After Issue 25, Tecna becomes more open with herself about her emotions and also comes to appreciate Timmy for being capable of balancing his logical and emotional sides. As such, she begins to openly display how hurt her father's decisions can make her, which allow the two to reach a better emotional understanding of the other. Despite this change though, Tecna still runs into situations where she cannot properly convey or control her emotions.

She is also shown to be very motherly toward her technological creations, like with Byte, whom she treats almost like her own son.

Tecna, as the Fairy of Technology, has technology-based powers. Her powers are entirely based on technology and digital energy, but, on occasion, she has been known to control electricity. She can create shields of energy, digital cages, and walls of magic energy. Tecna can also throw blasts of energy which can immobilize a person for a short time or cause them to explode. She is able to manipulate any machine and is able to connect with different networks which she can use as maps to help locate objects. Tecna has displayed precise control over machinery, gadgets, and devices alike to achieve a variety of effects whether it is to keep it in control, amplifying a certain trait, or repairing it. As, seen in 'Winx Forever' she is capable of imbedding electronic properties into regular objects.

Tecna has an affinity for light capable of generating small plasma orbs to illuminate an area, creating holograms, to misdirect opponents and display information, and amplifying electric light fixtures. She is able to generate, absorb, and redirect electricity from various power sources, and has the ability to create and control electro-magnetic fields and shoot spheres of plasma energy. Tecna is able to shoot rays of binary and use them as shields that protect her and others. At times, Tecna is able to scan an object to gain information and speak in binary code. Tecna has exhibited various problem-solving skills, as well as the ability to invent various machines. On occasion, Tecna has created geometric shapes to imprison others or as a defense.

Tecna has displayed the ability to summon data from the palm of her hand when she is analyzing a subject or using a database of information to solve a problem. She can also analyze a data transmission via magic and produce a rendering of the received data. She can create and control projections from various Technomagic devices, such as her phone. Tecna is very savvy with all digital technology she has been seen using, such as the Dream Probe, using it to scan various objects and computing the input of information as an analysis takes place. Her magic is green in color.

Tecna also knows some basic, first-level spells that all fairies can use, such as telekinesis, transmuting objects, and fixing minor messes. Tecna is so far the only magical creature in the series to be able to use spells with electronic devices such as her Dimensional Passage Creator in "Sea of Fear".

Tecna's power is generated from dreams. She retains her title as the Fairy of Technology, but her powers are more defensive in nature as she is mainly seen generating plasma spheres that protect beings from attacks as well as imprisoning opponents. Aside from generating plasma spheres, she can also create digital walls as an extension of technological areas such as the vault, which she can use to deflect attacks and confuse opponents. Tecna can control devices such as traffic lights and keypads, even changing TV channels with her fingers (The Chef Contest). As seen with the shadow creatures, she can form a small barrier around her opponent and tear them apart.

Her extensive intelligence often has her serving as the tactile one for the group. Like her main series counterpart, she is capable of scanning objects to gain better information and details, as well as creating a network to display this data. Aside from displaying algorithms via holograms, Tecna is capable of conjuring devices such as her hand held analyzer which was capable of holding/releasing and analyzing the Sleeping Sand and understanding the inner workings of the Magic Watch. She is also a skilled gamer.

Her weakness is that is too logical. Tecna also knows some basic, first-level spells that all fairies can use, such as telekinesis, transmuting objects, and fixing minor messes. Additionally, it is revealed in the episode "Neverland" that the Winx's powers, Bloom's included, are generated from dreams and thus, are closely linked with the World of Dreams. According to the World's Spirit, the Winx will lose their fairy powers should the World of Dreams fall into ruin.