Unla is a character who appears exclusively within the Winx Club Comic Series. Her first and only appearance is in Issue 107: The Dark Sirens alongside her fellow Sirens. According to Teredor, the Dark Sirens, Unla included, were once queens who faithfully served Andros in ancient times.

Unla has a tanned skin tone, wavy bright orange hair that flows down to her waist, auburn eyes and pink lipstick.

She wears a yellow bra that each resemble sea shells and a long mermaid's tail that matches the color of her hair. 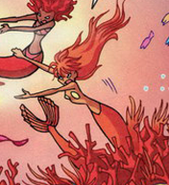 Unla makes her debut alongside her fellow Sirens in Issue 107 initially in a flashback as King Teredor explains the gravity of his wife's kidnapping to the Winx and his royal guards.

Realizing what the moving stars of the Mermaid's Tail constellation meant, Teredor explains that the Dark Sirens emerge from the deepest depths of Andros' oceans every time the constellation shines brightest in the sky. Using any body of water to reach the mainland, the four Sirens, Nazca, Terala, Unla and Limes, sneak into Niobe's bedroom through the water spouting out of her fountain and attack her. As they drag Niobe back into the depths of the ocean with them, their leader Limes leaves behind a coral necklace at the scene of the attack. With Niobe as their target, the Winx quickly realize that the Sirens plan to convert her into the fifth and final Siren needed to complete their group, and Teredor reveals that they will become invincible if that were to happen. So, the Winx promptly go into their Harmonix and enter Andros' oceans to rescue Niobe.

Upon entering the oceans of Andros, the Winx are met by a surprise attack orchestrated by Unla and Terala. The two of them use the surrounding coral as camouflage to confuse the six fairies. They eventually manage to sneak behind Stella and Unla watches as Terala blasts the Sun Fairy in the back, knocking her out. With the Winx now distracted by their concern for Stella's safety, Unla and Terala return back to their home in the Deep Blue.

Unla appears again in the Deep Blue after the Winx sneak in to spy on them thanks to the help of their Selkie friends. Here, Unla watches on with her sisters as Limes demands Niobe to forget her name and relinquish herself to the darkness that will soon convert her. Naturally, Niobe refuses but Limes mocks her for thinking that she had a choice in the matter. She then goes on to explain the process of how Niobe will be converted into Asfodelia until Aisha leaps from her hiding spot to strike down the Sirens with her Mystic Veil.

Unla is the only one to be hit by Aisha's attack but Limes and Nazca rush in to cover her and keep the Winx away from Niobe. Unfortunately, the Sirens become so engrossed in their fight against the Winx that they are completely unaware of the Selkies taking Niobe back to the surface.

Eventually, the battle reaches a point where Limes is able to will the darkness of the Deep Blue into spreading and intensifying enough to allow her and her sisters enough power to unleash a Convergence upon the Winx. The Convergence proves to be so powerful that Tecna and Musa struggle to shield themselves and their friends from it but Flora ultimately breaks the Sirens' formation by channeling the energy of the surrounding algae, causing them to glow so brightly that it disorients the Sirens. Using the opening she was given, Aisha launches her Thirteenth Seal at the Sirens, all of whom can barely hold back the intensity of her spell. When Limes demands to know the identity of the fairy who is defeating them, Aisha proclaims herself to be the Princess of Andros and that the Sirens made a grave mistake in challenging her. She then uses her Thirteenth Seal to force the Sirens into the deepest part of their abyssal home and banishes them for good.

As a creature of darkness, Unla and her Siren sisters all utilize dark magic and, as stated by Teredor, they all possess the ability to travel through any and all bodies of water to get from place to place. Also, like all magical creatures, Unla is able to create generic magical shields and shoot generic magic blasts.

Unla has shown the ability to shoot sharp bits of coral from the palms of her hands.

Retrieved from "https://winx.fandom.com/wiki/Unla?oldid=477241"
Community content is available under CC-BY-SA unless otherwise noted.