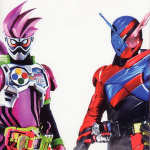 I started to care about everyone's happiness, & the Earth when I watched an episode of Fish Hooks a Disney Channel Show when the episode premiered May 17 2013, seeing Oscar have feelings for Bea throughout the show, & on the season 2 finale they danced on the prom Episode made me realized that heroes are cool Not because of their looks, abilities & form changing, their cool because no matter how hard they get beating so hard by their enemies, they would always stand up fighting not giving up with their anger filled to keep on protecting the future of the world & its people, & they are really protecting our world. After realizing all that I realized an even better dream, & that is to protect people's lives & happiness. Oscar and Bea became a real couple & admit their feelings for each other in the finale of Fish Hooks. After it ended I wasn't happy that it was ending, but I learned even though no new episodes air anymore, I always have them in my heart cherishing them. I started to become more mature and grown up & learn more about life, love, strength, making friends & caring for them from heroes like Kamen Riders, Super Sentai, & my favorite Ultraman/Ultras, even some of the Ultras live in many alternate Universes of other Earths. I also seen the same thing on Shows like Austin & Ally, Phineas & Ferb, & Disney Movie. Now I'm seeing the same thing happening on Winx Club which makes me like this show, like Musa wanting to reach her dream of being a singer, and using it to defeat Stormy is part of her strength, & Layla's dancing is part of her strength, & that's what I like about them. I learned that from Kamen Rider Gaim that this kind of happiness is true strength, including friendship. I would like to fight together with the Winx, & the Specialist to protect peace in the universe. I also started to think that cartoon characters like ones from Phineas & Ferb, Fish Hooks, & Winx Club are living things because they have dreams & filled with true love,  they’re real as long as you have a lot of imagination in you. I also learned from Super Sentai that dreams, Hopes, Fantasy & Prayers Combines to a great power known as Imagination, the power to dream. I even like to pick up trash, & recyclables that dirties the beautiful planet, including preventing Global Warming by burning CO2 for not from causing wildfires, that would kill, & scare animals, plants, & us humans, that's why recycling can prevent global warming, so I do this for everyone.

Retrieved from "https://winx.fandom.com/wiki/User:Ultraman4Ever?oldid=325452"
Community content is available under CC-BY-SA unless otherwise noted.