Vanessa is Bloom's adopted mother and the wife of Mike. She loves Bloom deeply and supports her with whatever she tries to pursue. She works as a florist in Gardenia.

Vanessa is a slightly tan-skinned woman with short brown hair framing her face and hazel-brown eyes. She wears light makeup, usually consisting of pale yellow-gold eye shadow and peach lipstick. She is assumed to be between the ages of thirty and forty. 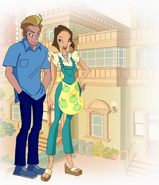 Vanessa is a kind and caring person with a lot of love in her. Unlike Mike, Vanessa had an easier time approaching the supernatural. This is shown when Vanessa learns that Bloom had saved Stella with her own magic. Vanessa love plants, something she shares in common with Flora, and was quite distraught when Mr. Bonner knocked over one of her plants.

Although a generally gentle person, she can be firm on her decisions, as show when Bloom had convinced Vanessa that Mr. Brown and Mr. Bonner are conman and tried to take over her flower shop, she immediately revoked her decision to work with them. Even when they had pressured her to stay with them she did not falter.

Vanessa also seems to enjoy teasing or messing with people. Shown when she took delight in waking up with a lie about being late for school and teasing Mike about his last remaining sanity when the Winx were living with them temporarily. Vanessa is also quite patient.