The Water Stars are magical items introduced in Season 3. The Water Stars are ancient magical artifacts that contain an ancient power which is the exact opposite of the Dragon Fire and is therefore the only force that can extinguish it.

The Water Stars are small, multicolored star-like objects. According to Stella, they feel like "gooey clams" to the touch. 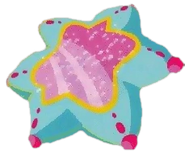 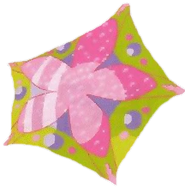 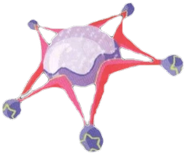 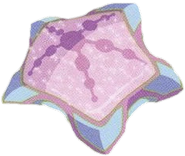 At the beginning of the Magic Dimension, when the Dragon Fire was born, an opposite force was also created, and it was contained in the Water Stars[1]. The energy of the Water Stars is the exact opposite of the Dragon's Flame[2], and both of them are powerful natural forces that are neither good nor evil.

Because they are naturally opposed to each other, the Dragon's Flame and the Water Stars could not exist in the same dimension without causing absolute chaos. Since something had to be done to restore the balance, ancient wizards came together to gather them and sealed them away in the Golden Kingdom[1], where they were kept in the Red Tower to prevent them from clashing with the Dragon's Flame[2].

In "The Red Tower," Tecna shows the Winx a book about how the Magic Dimension came to be. They learn that when the Dragon Fire was born, an opposite force contained in the Water Stars was also created. Amore interrupts Tecna saying that she thought Water Stars did not exist anymore, to which Tecna reveals that in their dimension, they do not. Further, she says that the Dragon Flame and the Water Stars could not exist in the same dimension and were sealed away by a group of ancient wizards. It is said that the Water Stars now lie in the Golden Kingdom, the portal to which is at the base of the Red Tower in the Veil Mist Forest beyond the Barrier Mountains. The Winx, the Specialists, and the pixies travel to the Veil Mist Forest to obtain the Water Stars, but before they can reach the tower, the Winx encounter the kingdom's guardians.

In "The Crystal Labyrinth," after fending the guardians off, the Winx, except Bloom, enter the portal and meet Arcadia, Fairy of the Golden Kingdom, and the rest of the Council of Elders. There, the Winx offer their plea for the Water Stars and Stella, Tecna, and Musa enter the Crystal Labyrinth in order to obtain them. After passing the test of the labyrinth, Arcadia entrusts them with the Water Stars, asking the Winx to protect them as they are as old as the universe.

In "The Wizards' Challenge," the Winx celebrate obtaining the Water Stars. In questioning how to use them, the Winx review the concepts of the Water Stars and Dragon Fire's opposing energies, and ultimately take them into the Alfea Potions Laboratory in an attempt release their power. After debating hitting them with a burst of energy, they decide to take a more hands-on approach. During this time, the Winx discuss Bloom's hunch that the Water Stars could neutralize Valtor, but also her powers in the process. After accepting a scenario in which she would lose her powers, Bloom and the Winx attempt to open a communication channel with the Water Stars. Later, Bloom meets with Faragonda and proposes using the magic of the Water Stars to capture Valtor, but Faragonda says that they should be kept at Alfea in case Faragonda, Saladin, and Griffin do not succeed in their battle, for they will be their last line of defense.

After attacking Valtor in the library, Bloom manifests the Water Stars to try to activate them. The Winx caution her as they do not yet know the effects it will have on her and state them to be too dangerous, but Bloom is determined as it is their only hope. Using Dragon Essence, she imbues the Water Stars with the Dragon Fire, summoning a magical wind weakening both herself and Valtor.

In "Witches' Revelation," Bloom suggests combining the energy of the Water Stars and the Winx's Enchantix power in order to reveal Cloud Tower. They converge their magic and that of the Water Stars, creating a flash of light through which Bloom sees Cloud Tower for a brief moment in time.

In "Wizard's Anger," Musa suggests using the Water Stars to destroy a possibly weak Valtor who is in hiding. Meanwhile, the Trix mention that the Water Stars dealt Valtor a considerable blow. Later, underneath the lakebed, Valtor brings up the Water Stars, saying that he cannot fight when they are present. Stella then unleashes them and Valtor recoils in fear as they will send him back to the Omega Dimension, but the Winx soon realize they have been led into a trap, as the Valtor before them is a decoy. After the Winx escape the crumbling lakebed, Valtor pulls Bloom down into the earth and states that there are no Water Stars present.

This prompts a duel between the two. Later, in Lake Roccaluce, Aisha unleashes the Water Stars in an attempt to destroy Valtor, but this only manifests his demon form. Using the Water Stars Catcher, a gem that belonged to the ancient wizards who banished the Water Stars from the Magic Dimension, he captures them and uses their magic against the Winx. They rise up and say they are unbothered by their power in an attempt to shield Bloom, but she goes beyond the bounds of their protection in order to use her Fairy Dust. Thinking she is using it against the Water Stars, Valtor remarks that it is futile as neither him nor the Water Stars are an evil spell, but in actuality, she is using it to break the seal on the Agador Box. As he flies out of the lakebed to catch his escaped spells, he drops the Water Stars Catcher, and in effect, the Water Stars, which is caught by Stella. After Valtor is defeated, Flora and Stella tell Bloom how brave, brilliant, and unbelievably scary it was for her to face the Water Stars, with Tecna saying she does not ever want to worry about her like that again.

Retrieved from "https://winx.fandom.com/wiki/Water_Star?oldid=513483"
Community content is available under CC-BY-SA unless otherwise noted.