Start a Wiki
The White Horse is a restaurant seen in the Winx Club Comic Series.

The White Horse is a restaurant owned by Greta located in Magix City.

The White Horse is a round building, with terraces in height, accessible via stairs. The restaurant's colors' are similar to Alfea's: light pink and blue, with an almost purple pink and yellow. Its logo is a white horse on a blue hexagon, almost in the shape of a diamond. 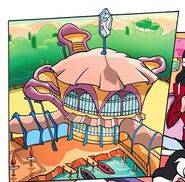 The White Horse.
Add a photo to this gallery

It seems that the White Horse have different uniforms for the waitresses, according to the first two comics it appeared in. During try outs, the girls seem to be allowed to wear their usual clothes while working, with a white apron with a white horse on it. Waitresses who are not trainees seem to have to wear a complete uniform: pink shirt and capris with a white tank top, a white half apron at the waist and grey shoes. However, it is unknown whether or not the waitresses have to wear the restaurant's uniform while they are trainees or just the apron worn during try outs, as Bloom was seen only wearing the full apron with the white horse on her first day of work. As she arrived three minutes late that day, she might have decided to only wear the apron rather than the complete uniform because it takes less time to put on.

Bloom during the try outs in issue 9

Retrieved from "https://winx.fandom.com/wiki/White_Horse?oldid=475722"
Community content is available under CC-BY-SA unless otherwise noted.