Travel with the Winx on an adventure to defeat evil fairy tale creatures with their new Bloomix abilities!

To start playing, press you cursor anywhere on the game screen. You can also adjust your sound volume with the button on the bottom left side.

The Winx have different roles. Look at the symbols and consider thoroughly who to pick.

These are the likely meaning of the symbols.

At the start, you will pick three of the six Winx, one for each role.

If you want to change a character, you can always reset it later, after you've picked all three. After sticking with your choice, the remaining are eventually all found throughout the story.

Moving to another level

In the "Level Select" stage, there is a sack of coins button on the top right side. Click it, and it will take you to a shop, where you can use your coins (if enough) to improve your Winx's abilities. To change the Winx to upgrade, tap the left or right arrow on the top left side, and to upgrade a Winx, click on and purchase a charm with the symbol corresponding to the ability to upgrade. You will also need to remember the symbol meaning. Defeat more enemies to get more coins!

To leave the shop, click the arrow button at the top right side.

To view achievements, if any, click the bottom right trophy button. 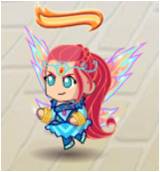 Bloom in her new Bloomix transformation in the game, after it was updated.

The game's new homepage, after the update, which features Bloom's new Bloomix power.

Once you finish the game... 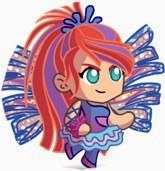 Bloom in Sirenix, before the update.
Add a photo to this gallery
Retrieved from "https://winx.fandom.com/wiki/Winx:_Bloomix_Battle?oldid=477849"
Community content is available under CC-BY-SA unless otherwise noted.