Winx Sirenix Magic Oceans is a app game developed by Melazeta Srl. This app was released for iOS on July 6, 2014 and released for Android on January 22, 2014.

The Evil Tritannus is polluting the seas and oceans of the all the worlds. Only the Winx Girls can stop him, but to do that they'll have to discover their new secret Sirenix Power!

Help Bloom and her friends transform into Sirenix. Stop pollution using special spells and magical items to save the oceans.

Discover the importance of ecology and with the help of the Winx Girls learn to protect the oceans and the world from pollution!

7 different worlds to save, among which Earth, Melody, Linphea, Solaria and Andros. 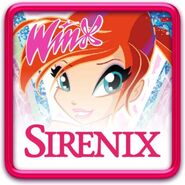