World of Winx is a spin-off series of Winx Club. It is co-produced by Rainbow S.r.l. and Netflix.

It first premiered on November 4, 2016 and it has two seasons, with thirteen episodes per season, with a length of twenty-two minutes per episode.

“Winx Club is sent to search for talented kids around the world, but the mysterious thief steals them and powerful fairies will try to prevent it.”

“…In their new iteration, the Winx fairies visit Earth as scouts for a talent show called WOW! As they search across the globe for talented kids, they come across the Talent Thief - a mysterious villain who is capturing gifted children. The Winx must go undercover and hide their fairy identities - often with hilarious consequences - to outfox the Talent Thief find his secret headquarters and protect the children of Earth.”

“The Winx will embark on an undercover journey all around the world looking for talented kids in art, sports, music, and science. These kids have their own kind of magic, and the Winx Club fairies are enchanted by them though it doesn't take long before trouble sets in, and a new and dangerous mystery for Bloom and the others to solve.”

“As talent scouts for WOW!, a talent show, the Winx are on Earth and they are busy to find boys and girls around the world, with a natural talent and a dream to achieve (in different fields, like singing, dance, information technology, music, art and so on...).

This task for them is funny but hard as well, because when they move from one city to another, they have to be careful to hide their fairy identities in their most dangerous mission ever: catching the Talent Thief, a mysterious and powerful being that, for unknown reasons, has already kidnapped some talented people. And it is going to do it again now.

The Winx have to act undercover finding and saving all the talents in danger... they will be in the middle of comical situations very often; investigating without drawing attention will bring the six girls to do so many different jobs (dog-sitters, journalists, waitresses, etc...) as long as they find the kidnapper's refuge: a mysterious and magical island.

This island is the mythical Neverland, ruled by a cruel queen, who once was a little fairy called Tinkerbell. Without her Peter Pan, grown-up and far away, the little fairy is grown-up as well now and is ready for her revenge, capturing the special people of the whole world in order to create her own new court of Lost Boys.”

“And this time the Winx are deep undercover on Earth, for the most top secret mission: to investigate the mysterious Talent Thief. And determined to save talented boys and girls in danger, along with an energetic host named Ace, they star in the talent reality show "WOW"!”

“The Winx are back with an awesome new mission: Save Neverland from the evil Queen by finding her old pal, Peter Pan.”

Bloom is the Fairy of the Dragon Flame. She is the leader of the Winx Club. She and the Winx work as talent scouts on a reality talent show called WOW. Bloom's talent for drawing makes a return and this talent of hers comes in rather handy as she is able to sketch pictures of important clues, people, and evidence.

Stella is the Fairy of the Shining Sun. She and the Winx work as talent scouts on a reality talent show called WOW. Stella continues to follow her dreams of becoming a fashion designer, however, she is much more talented in the field than previously displayed in the main series and it is not played for laughs as much as it is in the main series.

Flora is the Fairy of Nature. She and the Winx work as talent scouts on a reality talent show called WOW. Flora's talent is cooking (possibly referring to how she was often considered as the potions expert of the group).

Musa is the Fairy of Music. She and the Winx work as talent scouts on a reality talent show called WOW. Naturally, Musa's talent is singing and this talent of hers helps her bond with other musically-oriented talents like Annabelle and Madelyn.

Tecna is the Fairy of Technology. She and the Winx work as talent scouts on a reality talent show called WOW. Naturally, Tecna is a genius in all things technological and this talent of hers helps to bond with other technologically-gifted talents like Naoki. She regains her position as the Winx's main tactician.

Aisha is the Fairy of Waves. She and the Winx work as talent scouts on a reality talent show called WOW. Naturally, Aisha is talented at sports as she is often seen skating around the Winx Loft and is probably the best driver out of the Winx.

Roxy is the Fairy of Animals. She is owner of the Frutti Music Bar. She has a dog named Arthur, with whom she uses her exceptionally powerful animal magic to see what he sees. She can also detect nearby danger. She helps Bloom in dealing with the human detectives, Evans and Gomez, and following leads on the Talent Thief.

Ace is the host of WOW. He also acts akin to that of the Winx's boss.

Margot is one of the judges of WOW. She dislikes all of the acts presented and almost always votes negative. She has a dog named Puff who sits on her lap during the show. She is also notably the opposite of Cliff, who is much more positive.

Cliff is one of the judges of WOW. He generally keeps a bright, upbeat attitude and he always votes positively to any talent that shows up. He is notably the opposite of Margot, who is much more negative.

Lorelei was hired by Ace to replace Bloom, who was fired for embarrassing him. Lorelei was later fired after spewing "nonsense" to Ace, who at the time, was under the influence of a spell.

Annabelle is one of the talents who appears in World of Winx. She is the first talent to be kidnapped and her voice was stolen and used by the Queen.

Naoki is one of the talents who appears in World of Winx. He is a genius in technology like Tecna. He is one of the few talents that the Winx had discovered to not have been kidnapped.

Sophie is a fashion designer and one of the talents that appears in World of Winx. She is the second talent to be kidnapped by the Queen.

Nadine is one of the talents that appears in World of Winx. She is the second talent the Winx had discovered to not have been kidnapped.

Vincenzo is one of the talents that appears in World of Winx. He is the third talent the Winx had discovered to not have been kidnapped.

Yu is one of the talents that appears in World of Winx. She is the third talent to be kidnapped and her martial arts skills were taken, and used by the Queen.

Madelyn is one of the talents that appears in World of Winx. She is the fourth talent the Winx had discovered to not have been kidnapped.

Silke is one of the talents that appears in World of Winx. She is the fifth talent the Winx had discovered to not have been kidnapped.

Tinkerbell is the main villain of the first season of World of Winx. She manipulates the shadow creatures to kidnap young people from Earth in order to steal their natural abilities and talents. She uses Annabelle's voice when she encounters Bloom and Jim, but later steals Bloom's immense fairy powers to fight the other Winx girls. After she is defeated in the "The Fall of the Queen", it is revealed that she is Tinkerbell from Peter Pan.

At the start of the series, he was working under Tinkerbell's order. In "The Fall of the Queen", he joins in the final battle against the Winx, and after being defeated, abandons the Queen.

At the end of "The Shaman", he was shown that he was working under Tinkerbell's order, tasked with kidnapping his assigned targets and one of her most loyal subjects. He uses a set of stones that give him special powers.

Jim is the main villain of the second season of World of Winx. At the start of the Season 1, he was suspected of being the talent thief. He later works with Bloom to try to rescue Annabelle. In "The Fall of the Queen", it is revealed he is Captain Hook from Peter Pan, and that he was made young by the Tinkerbell's fairy magic. His ultimate goal is to take over the realm of Neverland.

He first appears in "Dangerous Waters" as an assistant to Ace but he uses his powers to hypnotize Ace, as well as control an army of Zombie Pirates. In "The Fall of the Queen", it is revealed he is Mr. Smee from Peter Pan.

She first appears as Venomya in Neverland" as a music critic, who acts as a minor antagonist to the Winx, wishing to destroy their career as musicians. In the Season 2 finale, "Tinkerbell Is Back", it is revealed Venomya is actually a witch named Baba Yaga. 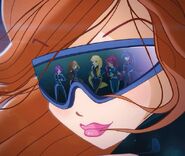 Retrieved from "https://winx.fandom.com/wiki/World_of_Winx_(Series)?oldid=483712"
Community content is available under CC-BY-SA unless otherwise noted.