Zenith is the realm of technology and, as a result, is heavily integrated and dependent on it.

The people enjoy a high standard of living. They pride themselves on multitasking and doing it well. They also use the metric system. According to Stella, Zenith is a freezing place. It was stated by Tecna that it is because the climate helps the techno droids and the technology to function well.

The Ocean Gate of Zenith is guarded by a selkie named Lithia.

The King of Zenith, King Cryos, first appears in Episode 18 of Season 5 attending the meeting in Domino with his adviser. He reappears in Episode 22, where he refuses to have Zenith join the alliance against Tritannus but, later into the episode, Tecna convinces him to join and is successful in doing so. He also makes a cameo in Episode 24, having joined the alliance and offering up Zenith's services.

The underwater plants present in the oceans of Zenith are dark green circles.

Not much of Zenith's fauna is shown but the Techsquirrels, like Tecna's Fairy Animal Flitter, are natives from the planet.

In Season 5, The Winx travel to Zenith in search of the Gem of Empathy. Tecna bonds with Lithia, the Gatekeeper of Zenith's Oceans. The Winx later go to Zenith to convince King Cryos to join the council and not have his kingdom defend itself.

In Season 6, The Winx and Timmy visit Zenith to find a way to make Cloud Tower visible again with the help of Tecna's parents. Tecna introduces her parents to Timmy and Tecna's father gives Timmy a test on how smart he is. After Timmy was approved, Electronio, Tecna's father lends the Winx an invisibility device.

The Winx at Zenith 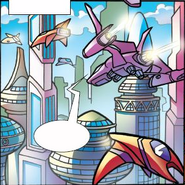 Add a photo to this gallery
Retrieved from "https://winx.fandom.com/wiki/Zenith?oldid=484540"
Community content is available under CC-BY-SA unless otherwise noted.