Zenko is a character exclusive to the Winx Club Comic Series, with her first and only appearance being Issue 103: Winx Music Tour: Magic of the East during the Winx Music Tour mini-series. She is one of the two fox spirits that reside in the Fox Gardens of Zhanjiang and fights fiercely to protect her home from Mister Sakura's workers. 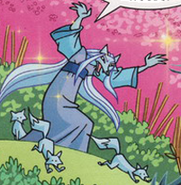 As more of a fox.

Retrieved from "https://winx.fandom.com/wiki/Zenko?oldid=476822"
Community content is available under CC-BY-SA unless otherwise noted.