Pixie of Bugs
PopPixie of Insects

Zing is the Pixie of Bugs and the PopPixie of Insects. She can shapeshift into many different characters and creatures.

Zing is very hyper. Her personality can change depending on what character she is cosplaying. She is very loving toward Glim.

Zing wears a cream fluffy scarf around her neck. She wears a bee like coat with cream fluff on the end of the sleeves, yellow shorts and black boots. She wears a pair of yellow goggles with a pair of antennas connected to it. She has light salmon skin, short bob haircut, purple hair and bright purple wings. 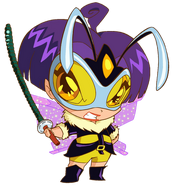 Zing's PopPixie Civilian Outfit remains unchanged. However, Zing's gender seems to have been changed into male. Making her the third Pixie whose gender was changed in PopPixie. The other three being Livy, Jolly and Digit for unknown reasons.

Zing wears a dark blue and sky blue themed attire with a shirt, pants, and boots. A yellow tie-like piece and yellow cuffs on his wrist, along with a yellow and light blue crown-tiara like piece on his head. His wings are blue with small bits of purple resembling a dragonfly.

Zings debut occurs on "The Shadow Phoenix". Darkar had imprisoned the Pixies to achieve Pixie Village's location, but thanks to Aisha and others they are freed from him. After the others Pixies bond with the rest of the Winx, is not show whether Zing and Glim stayed at Alfea or the forest.

Later on Zing is see helping the Winx and Specialists with some quests.

It was revealed in "The Pixies' Charge" that Zing has the ability to call bugs to help her and others. Zing calls the bugs in the episode "Spaceship".

Zing is the PopPixie of Insects. He gained his MagicPop in the eleventh episode "Let's Go Camp Pixie" through using his powers to communicate to insects, so they could save them from drowning. With this, his ability to interact with insects can boost.

Zing is able to shapeshift and is also able to communicate with insects and ask them for help in time of need.

Zing tends to use her shapeshifting powers to cosplay as different characters from other movies and series. Some of them were:

Zing as William Wallace from Braveheart

Zing as Dr. Brown from Back to the Future

Zing as the Wicked Witch of the West

Zing as Scorpion from Mortal Kombat

Zing as Scrat from Ice Age

Zing as Dr. Octopus from Spiderman

Retrieved from "https://winx.fandom.com/wiki/Zing?oldid=475953"
Community content is available under CC-BY-SA unless otherwise noted.